President Trump's budget proposal aims to cut all federal funding for PBS, NPR, and the National Endowment for the Arts. It likely faces an uphill battle in Congress after lawmakers rejected a similar proposal last year.

See Today’s News »   More Headline Roundups »
From the Left
4815
Arts and Entertainment
Why Are Trump and the G.O.P. So Determined to Kill PBS?
Vanity Fair 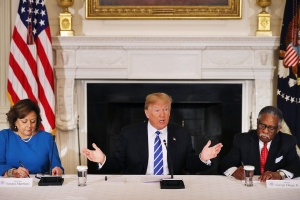 It’s a less than wonderful kind of day for PBS, as President Trump has once again embarked on a quest to gut public-media funding.

Read full story
Some content from this outlet may be limited or behind a paywall.
See full media bias rating for Vanity Fair
From the Left
4815
Arts and Entertainment
The Corporation for Public Broadcasting blasts White House over deep cuts to funding
The Week - News

The White House released its 2019 budget proposal Monday, which calls for cuts to programs like Medicaid while boosting military spending and designating money for the border wall. The Corporation for Public Broadcasting (CPB) would be hit especially hard, with President Trump's proposal rescinding "all but $15 million of each [fiscal year] 2019 and FY 2020 funding for public media," CPB president and CEO Patricia Harrison wrote.

The 2019 federal budget that the White House unveiled Monday again proposes cutting all federal funding for the Corporation for Public Broadcasting, which funnels money to NPR and PBS -- a potential move that the CPB president quickly slammed.