On Thursday, President Joe Biden will commit the United States to cutting its greenhouse emissions 50% to 52% by 2030 in remarks kicking off his climate summit event with world leaders. The target, aimed at slowing climate change, is non-binding unless approved by Congress. Yet Biden hopes it pushes other countries to submit more ambitious plans to the United Nations as part of the Paris Agreement, which former President Donald Trump rejected.

Before the announcement, environmental activists said a target of around 50% wasn’t ambitious enough. Conservatives said trying to meet it will sap the U.S. economy with no guarantees that other countries will follow through on their own pledges, since some fear a negative impact on their own economic growth. 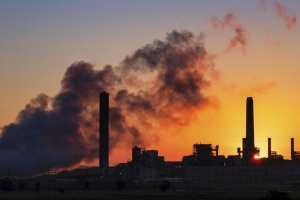 President Biden will announce on Thursday that the United States is targeting a 50%-52% reduction in greenhouse gas emissions by 2030 — a far-reaching goal that will require a significant overhaul to major sectors of the U.S. economy and Americans’ way of life.

Mr. Biden is announcing the pledge at a virtual climate summit of world leaders he’s hosting Thursday and Friday, coinciding with Earth Day on April 22.

Read full story
Some content from this outlet may be limited or behind a paywall.
See full media bias rating for Washington Times
From the Center
14619
Climate Change
At ‘moment of peril,’ Biden opens global summit on climate
Associated Press 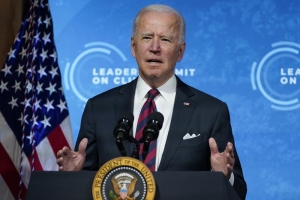 Declaring that the United States and other big economies must “get this done,” President Joe Biden opened a global climate summit Thursday aimed at getting world leaders to dig deeper on emissions cuts. The United States pledged to cut in half the amount of climate-wrecking coal and petroleum fumes it is pumping out.

“Meeting this moment is about more than preserving our planet,” Biden said, speaking from a TV-style set for a virtual summit of 40 world leaders. “It’s about providing a better future for all of us,” he said,...

President Joe Biden pledged to cut U.S. greenhouse gas emissions in half by 2030 as he convened 40 world leaders in a virtual summit intended to demonstrate renewed American resolve to fight climate change and pressure wary nations to raise their own ambitions.

Biden announced in opening remarks for the two-day summit that the U.S. will reduce its own greenhouse gas emissions 50%-52% from 2005 levels by the end of the decade -- significantly boosting a commitment made under former President Barack Obama that was scrapped by former President Donald...

Four years after President Donald Trump began to pull the US out of the landmark Paris climate agreement, President Joe Biden and his top officials are re-...