President Joe Biden announced Wednesday that the U.S. is set to reach his goal of administering 200 million doses of the COVID-19 vaccine, which is double Biden's initial goal of administering 100 million doses during his first 100 days in office. Biden extended the goal to 200 million after the U.S. met his initial goal of 100 million doses within approximately 60 days in office. Biden, who will reach 100 days in office net week, also announced tax credits for employers who give employees paid leave to get a vaccine dose. The tax credits are meant for employers with fewer than 500 employees, and were a part of the $1.9 trillion economic relief bill passed last month.

Biden also encouraged young people over the age of 18 to sign up to receive the vaccine, days after the administration announced that every American over the age of 16 is now eligible to receive a COVID-19 vaccine. Currently only two-dose Pfizer and Moderna vaccines are available, while the the single-dose Johnson & Johnson vaccines are paused by the CDC due to rare blood clots.

The story received consistent coverage across the political spectrum; some right-rated outlets claimed Biden sought to take sole credit for achieving his goal without crediting the research and development contributions from former President Donald Trump's administration, while left-rated outlets tended to focus more on Biden's speech. 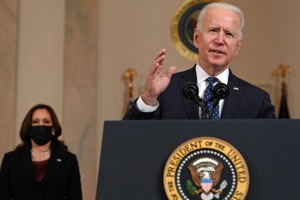 President Joe Biden on Wednesday touted the anticipated milestone of the United States administering 200 million coronavirus vaccine shots since he took office and urged businesses to give their employees paid time off to get vaccinated.

As a part of that call for time off to get vaccinated, Biden announced a new tax credit to fully offset the cost for small businesses and nonprofits providing paid leave for employees to get vaccinated.
"As we move into the vaccination campaign focused on working age adults, one concern I've heard from... 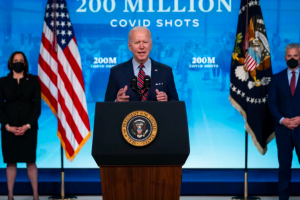 President Biden announced Wednesday that Americans have received 200 million COVID-19 vaccinations since he took office, double his initial goal of 100 million vaccinations in his first 100 days, and what he called "an incredible achievement for the nation."

Biden, who will officially cross the 100-day mark next week, also announced the availability of tax credits to employers who give their workers paid leave to get a shot.

"No working American should lose a single dollar from their paycheck because they are doing their patriotic duty to get vaccinated," Biden... 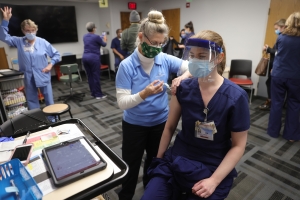 President Biden on Wednesday will hail the US passing 200 million COVID-19 vaccine doses administered — as the nation expands eligibility to all Americans over age 16.

According to CDC data, more than 213 million doses were administered as of Wednesday, enough to cover 51 percent of the adult population.

A White House official who briefed select journalists ahead of Biden’s remarks said he will outline how his administration plans to reach...

The number of births in the U.S. fell 4% in 2020, dropping to the lowest level since 1979 and continuing a multi-year trend of declining birth rates. That's...

'I wish I had a concrete answer.' Oregon confronts perplexing vaccine hesitancy as Covid-...

This mountainous frontier city on the Columbia River plateau romanticizes the pioneer personality of the Old West and celebrates its rugged past with one of...

The White House on Tuesday told states that coronavirus vaccine doses they choose not to order will become available to other states — the most significant...

Biden’s new goal: get 70% of Americans vaccinated by Fourth of July

Joe Biden has announced a goal of ensuring 70% of American adults receive at least one dose of the coronavirus vaccine by Independence Day on 4 July. The US...

Teams of experts are projecting COVID-19′s toll on the U.S. will fall sharply by the end of July, according to research released by the government Wednesday...

A tale of two pandemics: Europe and US take different exits

As they begin to emerge from the pandemic, Europe and the U.S. find themselves in different places with different priorities that reflect their values and...

The CDC's Guidance for Summer Camps Is Insane
OPINION

President Joe Biden announced a new vaccination goal on Tuesday while providing an update on the pandemic, aiming for 160 million U.S. adults to be fully...