President Joe Biden said Monday he might raise the 100-day goal of administering 100 million COVID-19 vaccination shots to 150 million. As of Jan. 25, at least 18.5 million people have received one or both doses of the vaccine in the U.S., according to data from the Washington Post. The Centers for Disease Control and Prevention (CDC) estimated more than 40 million vaccines have been distributed, while approximately 22 million have been administered. The CDC also estimated that more than 10 million doses were administered in the first month of the program, but that pace is accelerating in the second month. Biden told reporters that it would take about three weeks to reach the goal of delivering 1 million or more shots per day. Some pointed out that Biden's vaccination goal relies on a daily average of vaccinating 1 million people, a rate that was reached under former President Donald Trump when 1.3 million shots were administered on Jan. 11.

Biden's vaccine goal was covered primarily by left- and center-rated outlets, and received little coverage from the right, though it was covered by Newsmax. Right-rated sources tended to highlight how the goal was already reached by Trump. 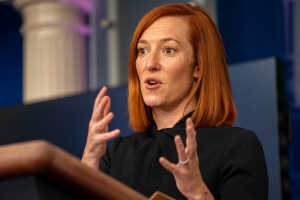 Biden’s first full day in office on Thursday saw 1.3 million Americans inoculated against the deadly coronavirus, according to data compiled by Bloomberg News.

But the same figures show that 1.3 million shots were administered on Jan. 11 and that 1.1 million were given both Jan. 14 and 16. 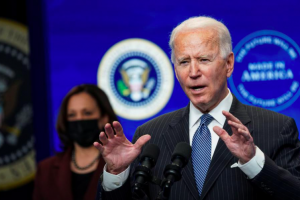 U.S. President Joe Biden said on Monday he might be able to raise to 150 million his 100-day goal of administering 100 million vaccination shots for the coronavirus.

Biden told reporters it is likely that 1 million or more shots a day will be delivered in about three weeks.

“If we wear masks between now and the end of April, the experts tell us we may be able to save 50,000 lives,” Biden said. 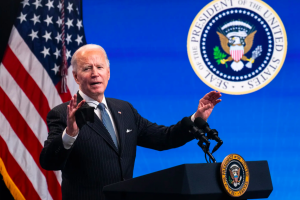 Joe Biden on Monday appeared to boost his goal for coronavirus vaccinations in his first 100 days in office, suggesting that the nation could soon be vaccinating 1.5 million Americans on average per day.

Biden signaled his increasing bullishness on the pace of vaccinations after signing an executive order to boost government purchases from US manufacturers. It was among a flurry of moves by Biden during his first full week to show he’s taking swift action to heal an ailing economy as talks with Congress over a $1.9tn stimulus package...

The pandemic fueled the Newsom recall. Will vaccines help him survive?
ANALYSIS

California’s coronavirus rates are now among the nation's lowest and schools are starting to reopen with vaccinated teachers. It's good news for the state —...

Earlier this week, Texas and Mississippi became the first states in recent months to lift mask mandates, reopen indoor dining, and do away with a host of other...

In a last-ditch effort to get every single Democrat behind the $1.9 trillion COVID-19 relief bill, Democrats on Friday made a change to jobless benefits in...

The Democratic-controlled Senate Saturday overcame Republican roadblocks and a debate that lasted beyond 24 hours to pass President Joe Biden's $1.9 trillion...

Q: Do the COVID-19 vaccines cause infertility? A: There’s no evidence that approved vaccines cause fertility loss. Although clinical trials did not study...

The Food and Drug Administration on Friday issued an emergency use authorization for a COVID-19 test for home and other over-the-counter uses. Why it...

The Covid-19 pandemic has caused mass trauma and on a larger scale than the second World War — the impact of which will last “for many years to come,” the...

Senate Democrats blocked an amendment by Republicans on Saturday that would have stopped taxpayer-funded stimulus checks from going to illegal aliens and...

The Senate voted 50-49 to pass Democrats’ $1.9 trillion coronavirus relief package on Saturday, after a marathon session of voting on various amendments....