According to emails from a laptop apparently belonging to Hunter, Joe Biden wrote a college recommendation letter for the son of Jonathan Li, the CEO of Chinese investment firm BHR, in which Hunter held a 10% stake as recently as last year. The president of Hunter's Rosemont Seneca investment firm emailed Li in Feb. 2017 saying that "Hunter asked me to send you a copy of the recommendation letter that he asked his father to write," and that the letter "is being FedExed" to Brown University's president. The news was first reported by Fox News; the alleged letter has not been made public. Joe Biden has denied having knowledge of or being involved in his son's business ventures.

No left- or center-rated news sources covered the letter as of Thursday. Conversely, the letter was a top story from many right-rated outlets. Reports from the right framed the letter as evidence that Joe Biden was involved in his son’s business activities despite his denials. Some opinions from the right speculated about other potential instances of the president doing business favors for Hunter. Journalist Sam Stein of MSNBC (Left bias) tweeted that the report is "a bad look for the president" while highlighting reports that Fox News's Tucker Carlson (Right bias) had Hunter Biden write his son a college recommendation letter. 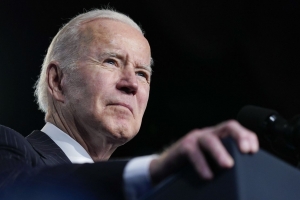 The official White House line that Hunter Biden’s enrichment schemes have been completely separate from Joe Biden can no longer be sustained. Brooke Singman and Peter Hasson of Fox News report that email traffic shows that in 2017 Joe Biden wrote a college recommendation letter for the son of a Chinese executive. Jonathan Li, who did business with Hunter Biden.

“Fox News Digital obtained emails between Hunter Biden and his business associates,” Ms. Singman and Mr. Hasson add, noting that according to the emails Joe Biden FedExed the letter to Brown University... 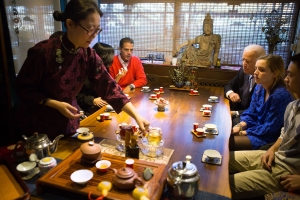 President Biden and the White House have repeatedly denied that he and Hunter Biden ever discussed the first son’s controversial overseas business dealings — yet there are at least a dozen times where Joe Biden had to know what his son was doing.

The latest example emerged Wednesday, when it was revealed that Hunter Biden got his dad to write a recommendation letter to Brown University for the son of a powerful Chinese business associate, Jonathan Li.

“Jonathan, Hunter asked me to send you a copy of the recommendation letter... 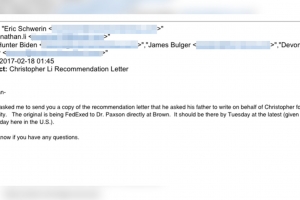 President Biden, in 2017, wrote a college recommendation letter for the son of a Chinese executive who did business with Hunter Biden, according to emails reviewed by Fox News Digital.

The president has repeatedly denied discussing Hunter's business ventures with his son.