This week, President Joe Biden reaches 100 days in office, a milestone often used to measure presidents' progress during the early part of their term. Since taking office, Biden has signed 11 bills into law and issued 42 executive orders — the most in a president's first 100 days since Roosevelt in 1933. Biden also reversed 62 Trump-era orders, which include re-joining the Paris climate agreement, pausing the U.S. exit from the World Health Organization and pausing border wall construction. Most news outlets focused on analyzing Biden's response to individual issues such as the COVID-19 pandemic, the economy, immigration, climate change and healthcare, as well as his bipartisan endeavors.

Outlets from across the spectrum said Biden has yet to make much progress toward his goal of restoring bipartisanship and unity; many cited Biden's American Rescue Plan, which passed without a single GOP vote, as evidence of this. Outlets on the left and center compared Biden's 53% approval rating 100 days into office, comparing it to that of Trump's. Some voices from the right claim Biden's high number of executive orders is proof Biden intends to push the left's agenda and is not really after bipartisanship. 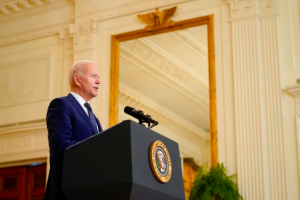 As far as artificial milestones go, few dates seem to carry as much weight as a new president's 100th day in office. It's a date that former Obama adviser David Axelrod once referred to as a "Hallmark holiday." In other words, it gets lots of attention but has no actual significance.

For better or worse, marking the first 100 days has become a time-honored tradition in Washington. For that, President Biden has Franklin D. Roosevelt to thank. Over the course of his first 100 days in office, FDR not only... 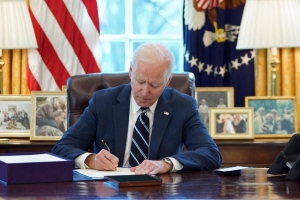 President Joe Biden has moved fast since his January 20 swearing-in, signing a $1.9 trillion Covid relief bill into law less than two months into his term and issuing more executive orders so far than his three predecessors.

Those efforts have paid off, with the administration reaching the milestones of 200 million coronavirus shots delivered and vaccine eligibility opened to everyone 16 and over before Biden's 100th day in office. Unemployment is falling, with new jobless claims hitting a pandemic low, and schools are reopening for in-person learning, returning kids... 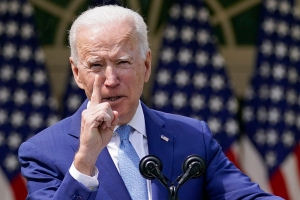 President Biden Thursday reached the 100th day of his presidency, an unofficial benchmark often used to reflect on how well a president is adjusting to his new office and whether he is fulfilling his campaign promises.

Biden's administration has gotten off to a fast start on a number of fronts. He proposed approximately $6 trillion in spending in three massive packages, issued a flurry of executive orders and has backed a variety of other causes, from D.C. statehood to voting bills.

The new president has had mixed results on...

Senate Minority Leader Mitch McConnell made clear Monday that he would block a Supreme Court nominee in 2024 if Republicans take back the chamber — a comment...

President Joe Biden on Monday called NATO’s Article 5 – which states an attack on one member nation is an attack on all – "a sacred obligation," and...

The Price of No Consequences for Trump
ANALYSIS

Joe Biden and Merrick Garland are acting like Donald Trump was a crazy dream. But the threat to American democracy will only get worse the longer we ignore it...

President Joe Biden frequently talks about what he sees as central in executing effective foreign policy: building personal relationships. But unlike his...

World leaders attending the Group of Seven summit on Sunday issued a call for a new study into the origins of Covid-19, including in China, after an...

5 Things To Watch At The Biden-Putin Summit

The Biden administration wants a more stable and predictable relationship with Russia. Russian President Vladimir Putin wants to show that his country is taken...

Group of Seven (G-7) leaders on Sunday called for a renewed, "transparent" investigation into the origins of the coronavirus and pledged to give 1 billion...

President Joe Biden on Sunday said the United States had restored its presence on the world stage as he used his first overseas trip since taking office to...

The election of Joe Biden as president has led to a dramatic shift in America’s international image. Throughout Donald Trump’s presidency, publics around the...

Russian President Vladimir Putin has denied that the Kremlin had a hand in cyberattacks on U.S. businesses and infrastructure ahead of his meeting...

Biden excludes US reporters from ‘very good’ meeting with Erdogan

President Biden said Monday he had a “good meeting” with Turkish President Recep Tayyip Erdogan after a last-minute decision to exclude US reporters from the...

President Joe Biden has bluntly called Vladimir Putin a "killer" and said he "doesn't have a soul." While he may have used robust...

The massive leak of billionaires' tax data has imperiled what support there might have been from Republicans to back President Joe Biden's plan to give...