President Joe Biden announced Monday that he would nominate Jerome Powell for another four-year term as Federal Reserve chair. The move bucked calls from some Democrats to replace Powell, a Republican nominated for chair by former President Donald Trump, with Democrat Lael Brainard; Biden instead nominated Brainard for vice chair. Biden explained his decision, saying, “We need stability and independence at the Federal Reserve.” On his plans for the future, Powell said, “We will use our tools both to support the economy and a strong labor market, and to prevent higher inflation from becoming entrenched.” Several politicians from both parties backed Biden’s choice, including Sen. Pat Toomey, the top-ranking Republican on the Senate Banking Committee. Meanwhile, Powell critic Sen. Elizabeth Warren said she would oppose Powell’s renomination. 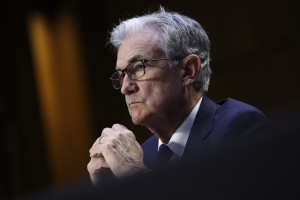 President Biden announced Monday that he will nominate Jerome Powell to a second term as chairman of the Federal Reserve, signaling that he believes the battle-tested central bank chief, who navigated the U.S. economy through the depths of the worst recession in nearly a century, is the best person for one of the most high-stakes jobs in the world.

The announcement ends months of speculation over whether Biden would stick with Powell, a Republican nominated by former President Donald Trump in 2017, or attempt to reshape the central bank by tapping Lael Brainard, the sole Democrat... 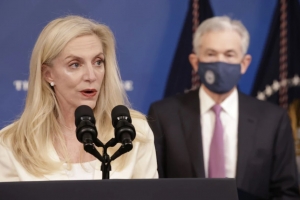 During his first term as Federal Reserve chair, Jerome H. Powell faced blistering political pressure and an enormous economic crisis. He has confronted an ethics scandal within the central bank and the steepest inflation in more than 30 years.

Despite all that, or perhaps because of it, President Biden on Monday announced he was nominating the 68-year-old Fed chairman for another four-year term. Democrats and Republicans gleefully offered their support.

Powell somehow emerged stronger than ever from the economic, domestic and political convulsions of 2020. He steered the Fed through wild...

Read full story
Some content from this outlet may be limited or behind a paywall.
See full media bias rating for Washington Post
From the Center
1631
Banking and Finance
Biden to Nominate Jerome Powell for Second Term as Federal Reserve Chairman
Wall Street Journal (News)

President Biden said he would nominate Federal Reserve Chairman Jerome Powell to a second term leading the central bank, opting for continuity in U.S. economic policy despite pushback from some Democrats who wanted someone tougher on bank regulations and climate change.

Mr. Biden said he would also nominate Fed governor Lael Brainard as vice chairwoman of the central bank’s board of governors. Prominent liberals like Sen. Elizabeth Warren (D., Mass.) had warned the president against picking Mr. Powell, and progressive groups mounted a last-ditch campaign to pressure the president to tap...