Biden to Nominate Bridget Brink as US Ambassador to Ukraine

The White House has announced that President Joe Biden will nominate Bridget Brink as U.S. Ambassador to Ukraine.

Brink is a career foreign service officer who has had assignments in Cyprus, Georgia, Uzbekistan, and Serbia. She is currently the U.S. Ambassador to Slovakia. If approved by the Senate, she would become the top U.S. diplomat in Ukraine as the country continues to defend itself from Russia's invasion, which is approaching its third month as Russia reveals its plan to control southern Ukraine.

Media from the right, left and center highlighted the fact that the U.S. has not had an ambassador in Ukraine since 2019, when Marie Yovanovitch was dismissed from the post by former President Donald Trump after reports that she was critical of him and blocking efforts to probe Hunter Biden's business dealings in Ukraine. Yovanovitch later accused Trump of a "smear campaign" after she was removed, and testified in Trump's 2019 impeachment hearings. 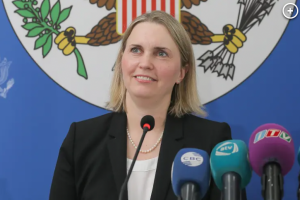 President Biden plans to tap Bridget Brink to serve as the US ambassador to Ukraine, two months after Russia launched its brutal invasion of the nation, the White House announced Monday.

Brink, a veteran and US diplomat, currently serves as the ambassador to the Slovak Republic and has a long history of working in European and Eurasian Affairs.

Her nomination was first indicated by US Secretary of State Antony Blinken and Secretary of Defense Lloyd Austin over the weekend in a secretive meeting with Ukrainian President Volodymyr Zelensky.

If confirmed, Brink would... 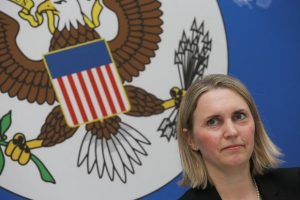 Her nomination requires Senate approval, and if confirmed, Brink, the current U.S. ambassador to Slovakia, would take over as the top American diplomat in Ukraine as the nation continues to defend itself from Russia's invasion. A career foreign service officer, Brink has had assignments in Uzbekistan, Georgia, Cyprus and Serbia, and served as the deputy assistant secretary in the State Department's Bureau of European and Eurasian Affairs. She also worked for... 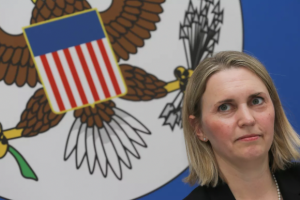 President Biden announced on Monday that he intends to nominate Bridget Brink to serve as U.S. ambassador to Ukraine.

Driving the news: The U.S. has not had an ambassador to Ukraine since former President Trump removed Marie Yovanovitch from the position in 2019.

Blinken announced during the visit that U.S. diplomats would return...