President Joe Biden and Iraqi Prime Minister Mustafa al-Kadhimi announced an agreement on Monday to formally end the U.S. combat mission in Iraq by the end of the year. “I think things are going well. Our role in Iraq will be...to be available to continue to train, to assist, to help, and to deal with ISIS -- as it arrives. But we're not going to be, by the end of the year, in a combat mission,” Biden said. Little will change on the ground, however, as the roughly 2,500 remaining U.S. troops in Iraq no longer regularly engage in combat and are likely to continue supporting Iraqi forces in an advisory capacity.

Coverage was mostly similar across the spectrum, with several outlets calling the change “symbolic” and discussing the start of the Iraq War in 2003. Coverage in some left-rated outlets focused more on how the announcement was influenced by Iraqi domestic politics. Coverage in some right-rated outlets mentioned that former President Donald Trump lowered the number of U.S. troops in Iraq from 3,000 to 2,500. 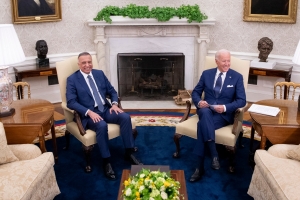 President Biden said on Monday that the United States would end its combat mission in Iraq by the end of the year, shifting fully to an advisory and training role as America dials down its involvement in long-term conflicts in the Middle East.

“We’re not going to be, by the end of the year, in a combat zone,” Mr. Biden said as he met with Prime Minister Mustafa al-Kadhimi of Iraq at the White House Monday.

The agreement to end the combat mission is largely symbolic, since U.S. troops no...

Read full story
Some content from this outlet may be limited or behind a paywall.
See full media bias rating for New York Times (News)
From the Right
312
Middle East
Biden hosts Iraqi PM at White House to talk end of US combat mission
New York Post (News) 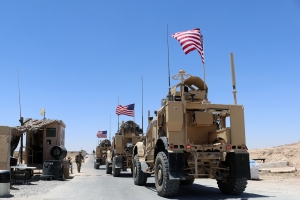 President Biden on Monday hosted Iraqi Prime Minister Mustafa al-Kadhimi at the White House to announce a planned end to the US military’s combat mission in Iraq.

The largely symbolic announcement means US troops will transfer most combat duties to Iraq’s military this year. But unlike in Afghanistan, Biden will keep a large US military footprint in Iraq.

Biden stressed that US troops aren’t leaving Iraq entirely — as happened in 2011, setting the stage for the Islamic State group to seize a third of the country, resulting in a US... 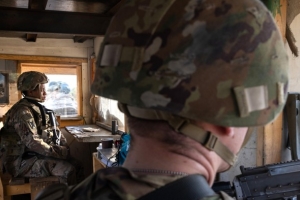 The United States is ending its combat mission in Iraq, President Joe Biden announced Monday, though U.S. troops will remain in the country to continue training and advising local forces.

“Our role in Iraq will be...to be available to continue to train, to assist to help and to deal with ISIS as it arises, but we are not going to be by the end of the year in a combat mission,” Biden said at the beginning of a meeting in the Oval Office with Iraqi Prime Minister Mustafa Al-Kadhimi.

An investigation by U.S. Central Command has determined that an Aug. 29 drone strike in Kabul killed an innocent aid worker and nine members of his family, not...

The White House has informed governors about the number of Afghan refugees they can expect to be resettled in their states in coming weeks, an...

America left the Taliban in Afghanistan with a valuable weapon: data
OPINION

The Taliban’s violent crackdown on protests against their hardline rule has already led to four documented deaths, according to a UN human rights official who...

A commercial flight took off from Kabul airport on Thursday for the first time since the Taliban seized Afghanistan, hours after the militants cleared a group...

‘It was a mistake.’ CENTCOM admits Aug. 29 drone strike killed civilians, not ISIS

When officials signed off Aug. 29 on a Hellfire strike to obliterate a white Toyota they had been monitoring for eight hours, the belief was that it...

The Biden administration notified governors and mayors on Wednesday of the number of Afghan evacuees their state is expected to receive in the coming weeks,...

Friction between pragmatists and ideologues in the Taliban leadership has intensified since the group formed a hard-line Cabinet last week that is more in line...

Scores of Westerners, including Americans, fly out of Kabul

Some 200 foreigners, including Americans, left Afghanistan on a commercial flight out of Kabul on Thursday, the first such large-scale departure since U.S. and...

The Pentagon admitted it made a “tragic mistake” after 10 civilians were killed in a U.S. airstrike in Kabul. Top officials acknowledged the error on Friday,...

The Orange County Board of Supervisors approved a three-year service plan for Afghan refugees entering the county as concerned residents...

After inheriting the Afghanistan quagmire from his predecessor, newly elect President Biden was staunchly committed to withdrawing troops from the...

Iran Pledges to Cooperate With UN on Monitoring Nuclear Program

Iran and the International Atomic Energy Agency (IAEA) reached an agreement on Sunday allowing the U.N. watchdog group to update cameras at Iran’s...