Amazon founder Jeff Bezos criticized the Biden administration in a series of tweets over the weekend.

Bezos, the world’s second-richest person, criticized a tweet from President Joe Biden on Friday for implying that raising corporate taxes would help ease inflation. On Sunday, Bezos said the Biden administration “tried hard to inject even more stimulus into an already over-heated, inflationary economy and only Manchin saved them from themselves,” adding, “Inflation is a regressive tax that most hurts the least affluent.”

On Monday, Bezos tweeted again, this time responding to a White House statement that defended Biden’s agenda, called Bezos “one of the wealthiest individuals on Earth” and tied Bezos’ criticism to a White House meeting with Amazon labor organizers. Bezos replied that “unions aren’t causing inflation and neither are wealthy people,” instead arguing that “inflation would be even higher than it is today” if Biden’s proposed Build Back Better bill had passed.

Coverage was widespread across the spectrum. Some coverage from the left described the clash as “silly” or “dumb,” occasionally highlighting administration officials who disputed Bezos’ characterization of inflation. Coverage from the right tended to use more sensational verbs like “rips” and “hits” to describe Bezos’ criticism. 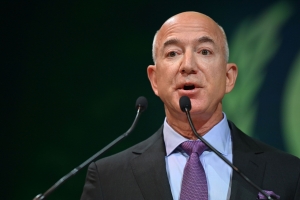 The White House on Monday hit back at Amazon founder Jeff Bezos after he took a swipe at President Joe Biden in a series of tweets over the weekend for his comments on inflation.

The exchange began Friday when Biden tweeted, without directly referring to Amazon: “You want to bring down inflation? Let’s make sure the wealthiest corporations pay their fair share.”

Read full story
Some content from this outlet may be limited or behind a paywall.
See full media bias rating for CNBC
From the Right
302
Economy and Jobs
Biden has unlikely and escalating Bezos beef
Washington Examiner

It's the latest episode in an increasingly tense relationship between the Biden administration and one of Washington's most well-known part-time residents. Bezos owns the liberal-leaning Washington Post and the district's largest house and is building a second headquarters for Amazon across the Potomac in Arlington, Virginia, but finds himself at odds with President Joe Biden, whom he blames for high inflation.

Read full story
Some content from this outlet may be limited or behind a paywall.
See full media bias rating for Washington Examiner
From the Left
302
Economy and Jobs
Jeff Bezos and Joe Biden are having the stupidest fight ever
CNN Business 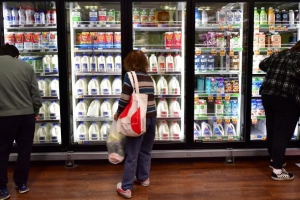 Among the many silly, mind-numbing, agenda-pushing exchanges happening on Twitter at any given moment, the one playing out between the President of the United States and the world's second-richest person stands out for both its dullness and its deliberate oversimplification.

If you've been away from Twitter lately, first of all: Good on you. Here's a quick recap of the dispute between Jeff Bezos and President Joe Biden.

On Friday, Biden tweeted that the way to bring down inflation is to "make sure the wealthiest corporations pay their fair share."

News
Morgan Stanley CEO issues odds on whether US will fall into recession: 'It’s going to be bumpy'
The Blaze