Baytown,Texas: Officer Kills Woman After Screaming She Was Pregnant

Baytown Police officer killed a woman after a struggle ensued, Monday night. The person shot was a 44 year-old black grandmother, Pamela Turner, who was well known to the community as being schizophrenic. She was being arrested for having outstanding warrants; a struggle started after Turner allegedly used the officer's taser against him, according to Baytown Police Lt. Steve Dorris. Though she yelled that she was pregnant, it is now known that she was not- however, it is unclear whether the officer knew this at the time. Video of the incident, though graphic, has gone viral on social media and is yet another chapter in a very polarizing issue.

Baytown,Texas: Officer Kills Woman After Screaming She Was Pregnant 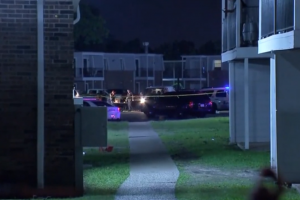 An investigation has been launched after a Texas police officer shot and killed a woman during an arrest after she shouted, “I’m pregnant.”

The officer from the Baytown Police Department was patrolling the area around The Brixton Apartments on Garth Road on the evening of May 13 when he came across a 45-year-old woman who he recognized as having outstanding warrants.

According to the department, the officer then deployed a Taser against the woman while attempting to detain her following a struggle.

The woman is alleged to have taken the... 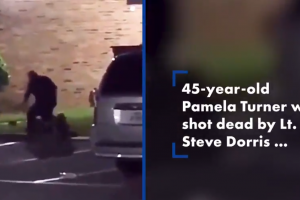 Chilling video captured a Texas police officer shooting dead a woman moments after she yelled, “I’m pregnant!” while fighting for the cop’s Taser.

The woman was not pregnant, cops said Tuesday.

Grandmother-of-three Pamela Turner, 44 was shown on the video struggling to resist arrest for outstanding warrants outside an apartment complex in Baytown on Monday night, KPRC Click2Houston reported.

“You’re actually harassing me,” she yells at the unidentified officer, telling him angrily, “I’m actually walking to my house.”

The shaky footage then catches the cop firing his Taser and... 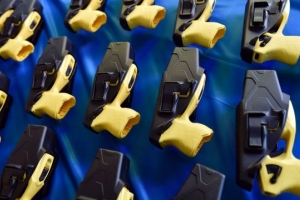 A Houston-area police officer fatally shot a woman who he said grabbed his Taser and used it against him, according to The Associated Press.

Baytown Police Lt. Steve Dorris said the officer, an 11-year veteran of the department, encountered the 45-year-old woman on Monday and attempted to arrest her on outstanding warrants while patrolling an apartment complex.

Dorris said the officer opened fire after the woman grabbed his Taser and used it on him, according to the AP.

A video recording of the incident shows the woman saying “You’re actually...

On anniversary of MLK's death, his words are 'more relevant' than ever, his son says

In "times of challenge," Martin Luther King Jr. didn't back down, his family says. It's a lesson that still resonates as they remember the slain civil rights...

The Justice Department on Monday declined to file federal civil rights charges against the NYPD officer involved in the chokehold death of Eric Garner, whose...

Economist Stephen Moore, who is on President Trump's council tasked with reopening the country, said he is helping plan a protest of Wisconsin's state-at-home...

Associated Press
Civil Rights
Why disease boosts discrimination, and what that costs society

These days, the speed at which events unfold can leave us feeling as though every situation is unprecedented and beyond our control. But the past can inform...

America has a 'gruesome' history of lynching, but it's not a federal crime. A House...

The House is expected to vote Wednesday on legislation that would make lynching a federal crime, a move supporters say is long overdue in a country whose...

Economic depression and unemployment can be overcome, but a massive loss of American civil liberties might be tough to unwind, according to economist Ben Stein...