The city of Baltimore's chief prosecutor was charged with multiple crimes by a federal grand jury on Thursday.

State's Attorney Marilyn Mosby faces two counts of perjury and two counts of making false statements on mortgage applications for the purchase of vacation homes in Florida. When Mosby requested one-time withdrawals of $40,000 and $50,000 from her city retirement account in May 2020, she allegedly said that she "experienced adverse financial consequences" due to COVID-19 despite the fact that her gross income in 2020 increased nearly $10,000 from the previous year. She is also accused of failing to disclose unpaid federal taxes from previous years on the mortgage applications. Mosby's attorney responded by saying the "bogus" charges are "rooted in personal, political and racial animus."

Some reports from right-rated sources tied Mosby to prominent left-wing figures such as progressive billionaire George Soros and Vice President Kamala Harris, recalling Harris's previous statements of support for Mosby and how she credited Harris as her "inspiration" to run for office. Coverage from left- and center-rated outlets did not, and focused more on the details of the indictment and Mosby's alleged crimes. 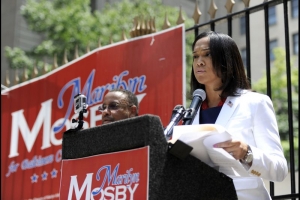 A federal grand jury has indicted Baltimore’s top prosecutor Marilyn Mosby on charges of perjury and making false statements with a series of financial transactions that helped her buy a condo on Florida’s Gulf Coast and another property near Orlando, Florida.

Mosby, 41, is charged with falsely claiming to suffer financial hardship from the coronavirus to obtain an early withdrawal from her retirement savings to purchase the homes. In addition, federal prosecutors allege she lied on a mortgage loan application by hiding an outstanding federal tax debt. And they accuse... 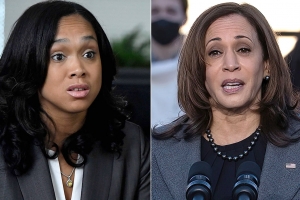 Baltimore State's Attorney Marilyn Mosby -- who was indicted on federal perjury charges Thursday – has previously praised and been supported by Vice President Kamala Harris during her rise as a progressive Democrat in Maryland.

"When we march and we shout about what we need to do to reform the criminal justice system, we better understand that we gotta march and shout with our paychecks – and all of the work that we can do to actually make sure that somebody like Marilyn Mosby gets reelected into that office, to not only get... 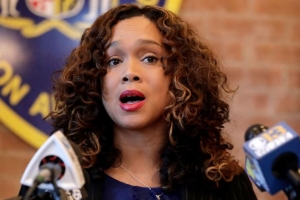 The chief prosecutor for the city of Baltimore has been indicted by a federal grand jury on two counts of perjury and two counts of making false statements on loan applications for the purchase of two vacation homes in Florida, according to court documents filed Thursday.

State's Attorney Marilyn Mosby, who gained national attention in 2015 for charging officers in the in-custody death of Freddie Gray, now herself faces perjury charges over documents she submitted to apply for loans against her retirement plan in 2020, according to the indictment.