A judge sentenced three Georgia men to life in prison on Friday for the murder of Ahmaud Arbery.

Superior Court Judge Timothy Walmsley denied the possibility of parole for two of the men — Gregory McMichael and his son, Travis McMichael. The third man, William Bryan, will be eligible for parole after 30 years in prison. The men were found guilty of murder in late November, roughly six weeks before Friday’s sentencing hearing.

Coverage was widespread across the spectrum on Friday. As with other stories about race, coverage varied widely on how they discussed race. While most outlets capitalized black and not white, the Washington Post (Lean Left) and Fox News (Right) capitalized both; BBC News (Center) capitalized neither. Additionally, NPR (Center) included “white men” in its headline, and the New York Post (Lean Right) said the men were “white” but did not directly mention Arbery’s race. 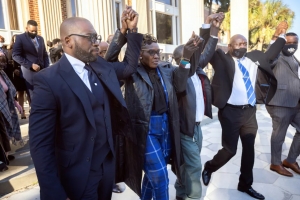 The three White men convicted of murdering Ahmaud Arbery nearly two years ago in a case that sparked nationwide outrage and protests, were sentenced Friday to life in prison, two of them without the possibility of parole.

Travis McMichael, his father Greg McMichael and their neighbor William “Roddie” Bryan chased and killed Arbery, a 25-year-old Black man, in February 2020. Their pursuit of Arbery in pickup trucks through suburban streets near Brunswick, Ga., ended with Travis McMichael fatally shooting Arbery, who was unarmed. All three face federal hate-crime charges in a...

Read full story
Some content from this outlet may be limited or behind a paywall.
See full media bias rating for Washington Post
From the Center
5068
Justice
Ahmaud Arbery: Jogger's murderers sentenced to life in prison
BBC News 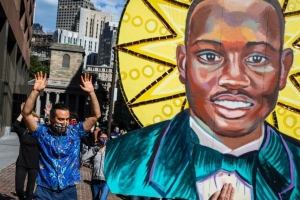 A white father and son convicted of killing a black jogger have been sentenced to life in prison without the possibility of parole.

In November, a jury found Travis and Gregory McMichael and their neighbour, William Bryan, guilty of murdering Ahmaud Arbery in February 2020.

Bryan also received the maximum penalty of life, but was offered the possibility of parole in 30 years.

The judge said the McMichaels had not shown remorse or empathy for Arbery.

Judge Timothy Walmsley said he gave them severe sentences in part because of their... 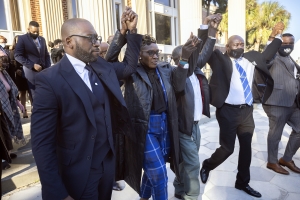 The three white Georgia men who chased and gunned down Ahmaud Arbery were each given life sentences Friday for what the dead jogger’s dad called a modern-day lynching “in broad daylight.”

Shooter Travis McMichael, 35, and his 66-year-old dad, ex-cop Gregory McMichael, were both told they would spend the rest of their lives behind bars without the possibility of parole. Even though they can never be released, both were also given an extra 20 years to run consecutively on a lesser aggravated assault charge.