The $600 weekly unemployment benefit that aided millions of jobless Americans during the COVID-19 coronavirus pandemic is set to expire Friday. A polarized Congress failed to reach an agreement on the benefits before dispersing for the weekend; how to extend the aid is part of the core debate between lawmakers about creating another federal virus relief package.

Coverage from some left-rated outlets framed the expiration as bad for Trump's re-election chances and a sign of GOP inefficiency in Congress. Some coverage from right-rated outlets instead focused on the reports of multiple recent GOP proposals to extend the benefits that were purportedly rejected by Democratic lawmakers. 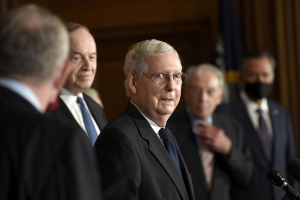 WASHINGTON — A crucial week on Capitol Hill that began with a rocky Republican rollout of a coronavirus relief package ended with a complete breakdown in negotiations, threatening to deepen the perils of an already embattled President Donald Trump.

The Republican-led Senate adjourned Thursday for a long weekend with no action on COVID-19 relief, all but ensuring that a $600 weekly federal unemployment benefit would expire Friday.

The payment has been a financial lifeline for more than 20 million out-of-work Americans. The U.S. recorded its worst quarterly economic contraction ever...

WASHINGTON – A $600 weekly unemployment benefit that has helped millions of Americans stay afloat amid the coronavirus pandemic will officially end at midnight as Congress adjourned for the weekend without coming to any deal on the program or a larger emergency stimulus package.

The discussions over another package turned testy Friday as Democrats and Republicans each blamed the other for their inability to come to an agreement, leaving out-of-work Americans in limbo as the vital benefits come to a halt.

WASHINGTON — White House chief of staff Mark Meadows lashed Democrats for rejecting what he said were four different offers to extend the $600 per week federal unemployment boost which expires Friday.

“Those four different offers have been actually rejected — but more importantly than that, they’ve not even been countered,” Meadows said Friday morning.