Attorneys general from 48 states have signed onto an antitrust probe of Google, which will investigate the company's alleged efforts to maliciously suppress advertising and search competition.

Most media outlets, regardless of political leaning, acknowledged that California and Alabama refrained from joining the probe. Many also reported that Google and other large technology companies are currently facing lawsuits and investigations from multiple angles. 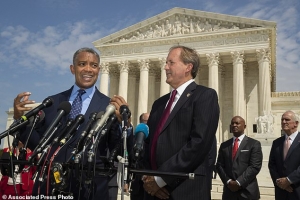 Fifty U.S. states and territories, led by Texas, have announced an antitrust investigation into Google's 'potential monopolistic behavior' as they examine whether the Silicon Valley tech giant has gotten too big and effective at stomping or acquiring rivals.

Texas Attorney General Ken Paxton formally announced the probe on Monday and said it would focus on Google's advertising business.

States have formally requested documents from Google on its advertising business.

Several of the attorneys general at the announcement in Washington D.C. described the investigation as 'preliminary' but said they...

Read full story
See full media bias rating for Daily Mail
From the Center
1637
Technology
State probes into Big Tech are a ‘backstop’ in case the feds back down, say antitrust experts
CNBC 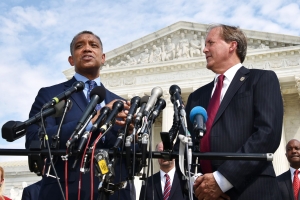 Nearly all the country’s attorneys general are now putting their weight behind antitrust investigations of Big Tech. And while the state-led probes will turn up the heat on companies like Google and Facebook, they will also likely add pressure to federal regulators who have launched their own investigations into the industry, according to antitrust experts.

A bipartisan group of attorneys general from 48 states, the District of Columbia and Puerto Rico announced Monday they would pool resources to probe Google’s advertising business. The announcement follows that of a smaller, overlapping... 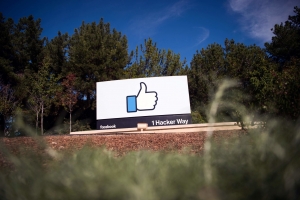 There is a major force uniting America’s fiercely partisan politicians: big technology companies. Democrats and Republicans at the federal and state levels are coming together to scrutinize the power of the Silicon Valley giants and, potentially, to rein them in.

Letitia James, the Democratic attorney general of New York, announced on Friday that attorneys general in eight states — four Democrats and four Republicans — and the District of Columbia had begun an antitrust investigation of Facebook.

Next up for state regulators is Google. A similarly bipartisan group led by...

A recent study shows the algorithm used by ride-sharing companies Uber and Lyft may discriminate against customers taking trips to or from predominantly non-...

Black Enterprise
Race and Racism
Instagram used to be where people escaped the news. The Black Lives Matter protests changed that.
ANALYSIS

Tech platforms have a trust problem. Do they care?
ANALYSIS

REPORTING ON JOURNALISM has been a more depressing task than usual in the recent past, and the economic fallout from the coronavirus pandemic might make us...

Here are the major brands that have pulled ads from Facebook

Since an advertising boycott of Facebook Inc. was organized in mid-June, a veritable Who’s Who of major brands have either added their names to the #...