Bolduc, a staunch conservative, defeated the more moderate state Sen. Chuck Morse, who was favored to win. In November, Bolduc will face Sen. Maggie Hassan (D), who won by only one-tenth of one point in 2016. The Senate race is expected to be one of the most competitive this year, as Democrats battle to maintain their majority in the Senate and Republicans attempt to regain control. Bolduc will now bid for the endorsement of former President Donald Trump, who did not endorse a candidate during the New Hampshire Senate primary.

Meanwhile, Gov. Chris Sununu won the Republican party's nomination for another term. He is favored to win against Democrat Tom Sherman, who ran unopposed on Tuesday.

Many right-rated news sources point out that Republican primary voters in moderate or Democrat-leaning states such as Maryland and Massachusetts have similarly chosen conservative candidates, and that a number of Republicans think President Joe Biden's drag on his party will be a bigger factor in November than whether Republican candidates are Trump loyalists or moderate. Some left-rated sources, conversely, highlighted speculation that some Republican are worried that their chances of winning the Senate in November have been hurt by the nomination of Trump-aligned candidates. 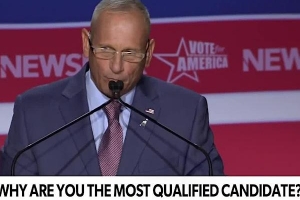 Bolduc, a staunch conservative, held off the more moderate state Sen. President Chuck Morse and will now bid for the endorsement of former President Donald Trump, who did not make a choice in a field of candidates bidding for his support.

Republicans see Hassan as beatable in the general election,... 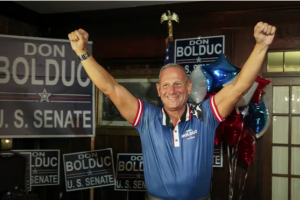 A far-right Republican who backs Donald Trump’s election fraud lie and has vowed to decertify results in 2024 looked set on Wednesday to be the GOP candidate for US Senate in New Hampshire.

Don Bolduc, a retired special forces general who has said he suffered from PTSD and a traumatic brain injury, was on track to edge out Chuck Morse, the state senate president, to face the incumbent Democrat, Maggie Hassan, in November.

The primary was the last in a series that have seen Republicans select candidates aligned with Trump, causing some to...

The Associated Press has not yet called the race for Bolduc, but he leads Morse by 1 percentage point with more than 80 percent of the vote reported.

Morse tweeted early in the morning that he called Bolduc to congratulate him and said that the focus needs to...