Riots, looting and violence broke out in South Africa over the past week after former South African President Jacob Zuma was imprisoned on July 7 for refusing to testify in a corruption inquiry. An official said Thursday that the chaos had resulted in over 2,200 arrests and 117 deaths. The same day, the South African government deployed 25,000 troops to quell the riots. On Friday, South African President Cyril Ramaphosa said the violence had been “planned and coordinated” and that “we will not allow anarchy and mayhem to just unfold in our country.” Zuma, who will begin serving a 15-month prison sentence, has been a figure in South African politics since 1959, when he joined the African National Congress party that fought apartheid and has governed the country since 1994. While many call him a freedom fighter, Zuma has also faced corruption charges throughout his political career. 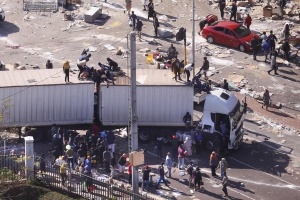 Food and fuel shortages in South Africa have grown so severe amid deadly rioting and looting that some on the front lines are considering cannibalism, according to a report.

“We are on the verge of eating each other,” community leader Nhlanhla Lux told the Financial Times as he and a group of other armed men dug in to defend the Maponya Mall in Soweto from looters.

“The biggest mall that employs the biggest number of people is the one left standing,” the 33-year-old, clad in camouflage and carrying a pistol, told the outlet of... 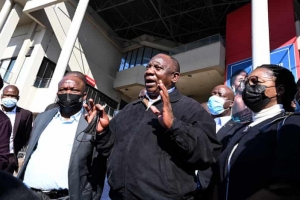 The wave of protest and looting that swept across much of South Africa over the past week was planned by enemies of democracy in a deliberate effort to sow chaos, the president has said.

Speaking to reporters in some of the areas worst hit by the unrest, Cyril Ramaphosa said authorities had identified “a good number” of those who planned and coordinated the violence, the worst in South Africa since the end of the apartheid regime in 1994.

“We will not allow anyone to destroy our democracy. This is a hard-fought-for democracy and we... 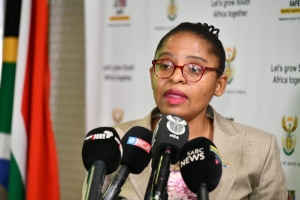 Government has announced that the number of people who have lost their lives due to the recent riots, has risen to 117. Gauteng and KwaZulu-Natal (KZN) have been the scene of chaos – what started out as semi-violent demonstrations demanding former president Jacob Zuma’s release from prison soon morphed into violent looting sprees targeting malls and other establishments in both provinces.

Acting minister in the Presidency Khumbudzo Ntshavheni gave an update on the unrest, on Thursday afternoon, 15 July 2021.

“To date, the SAPS have received reports of 26 deaths cumulatively in...