Malerba sworn in as 1st Native American in US Treasurer post

Federal State And Tribal Powers, Native Americans
Save for Later
From The Left 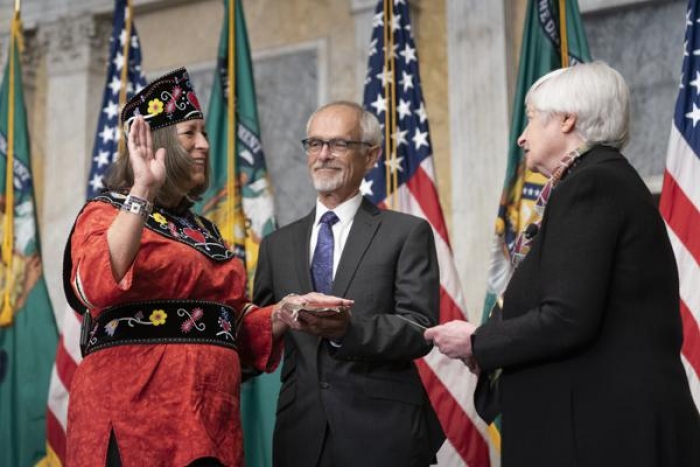 Mohegan Chief Marilynn “Lynn” Malerba was sworn in Monday as the Treasurer of the United States, the first Native American to hold that office.

Her signature will now appear along with Treasury Secretary Janet Yellen on U.S. currency.

Yellen hailed the appointment at the Treasury Department ceremony as a sign of the Biden administration’s “respect for, and commitment toward, our nation-to-nation relationship, trust and treaty responsibilities, and Tribal sovereignty and self-determination.”

“For all our progress — there is more work to do to strengthen our nation-to-nation relationship with Tribal governments,”...

What Are The Barriers To Native American Homeownership?
Forbes

Cherokees ask US to make good on promise: A seat in Congress
ABC News (Online)

Analysis
Greg Abbott ran as a small-government conservative. But the governor’s office now has more power than ever.
The Texas Tribune

Analysis
Land Is Power, and the Osage Nation Is Buying Theirs Back
Bloomberg

Opinion
Hurricane Ian is proof: The US needs a national disaster safety board
The Hill