Young Dems more likely to despise the other party

Polarization, Democratic Party, Culture
Save for Later
From The Center 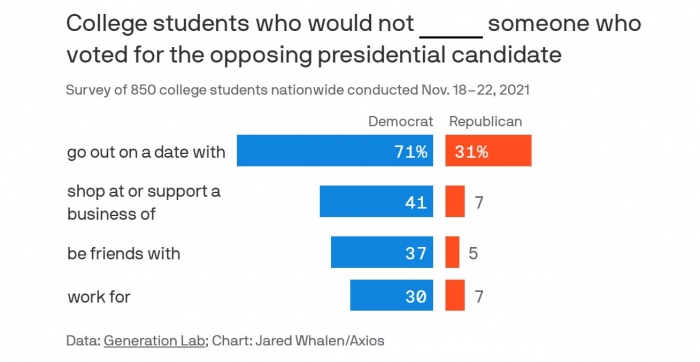 Nearly a quarter of college students wouldn't be friends with someone who voted for the other presidential candidate — with Democrats far more likely to dismiss people than Republicans — according to new Generation Lab/Axios polling.

Why it matters: Partisan divides — as each side inhabits parallel political, cultural and media universes —make a future of discord and distrust in the U.S. all the more likely.

By the numbers: 5% of Republicans said they wouldn't be friends with someone from the opposite party, compared to 37% of Democrats.

Beto O'Rourke made the Uvalde shooting all about himself
Washington Examiner