Economy and Jobs, White House, infrastructure bill, Facts and Fact Checking, fact checking
Save for Later
From The Center 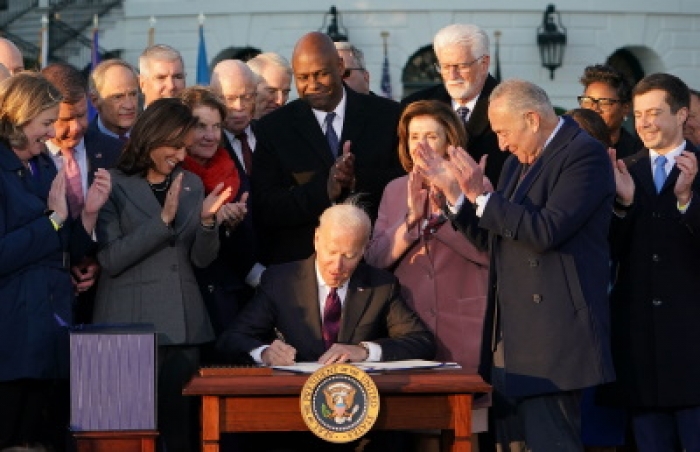 Both President Joe Biden and Vice President Kamala Harris lauded the bipartisan infrastructure legislation for creating good-paying jobs for “millions” of Americans. But they meant millions of job-years, not millions of additional jobs.

In fact, estimates of how many additional jobs the law will create range from not many to about 1 million over 10 years. The $1.2 trillion act includes about $550 billion in new federal spending over five years.

It is possible that millions of people could be affected, if there are a lot of part-time, part-year and short-term positions. The job-year concept, though, is not the standard way of measuring the impact on employment and not clear from Biden’s or Harris’ remarks.

Biden signs H.R. 3684, the Infrastructure Investment and Jobs Act, on the South Lawn of the White House on Nov. 15. Photo by Mandel Ngan/AFP via Getty Images.

On Nov. 6, after the House passed the infrastructure bill, Biden said in a statement that it “will create millions of jobs,” and just before Biden signed the legislation into law on Nov. 15, he said: “It creates better jobs for millions of Americans.” Harris also said at the bill-signing event: “After this bill is signed into law, millions more Americans will go to work in good-paying good union jobs.”