World, Immigration, Belarus, Poland, Eastern Europe, Europe
Save for Later
From The Left 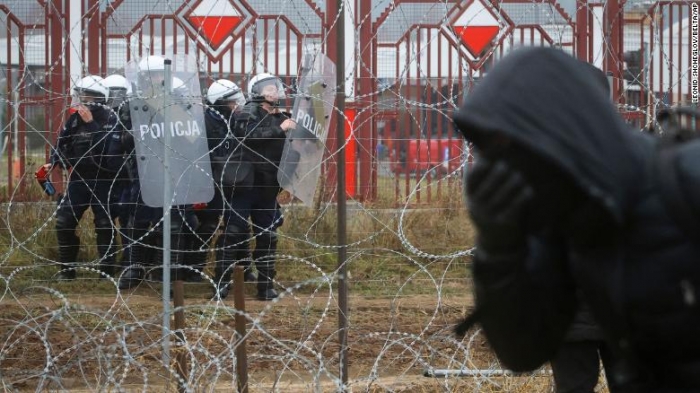 Violence erupted at the Poland-Belarus border on Tuesday, as migrants desperate to cross into the European Union threw stones at Polish border guards who responded with water cannon and tear gas.

Polish and Belarusian authorities have blamed one another for the ratcheting of tensions on the border, where thousands of people have traveled in the hope of making it into the EU only to find themselves stuck in freezing conditions.

There were chaotic scenes on the Bruzgi-Kuźnica border crossing, where crowds of migrants could be seen breaking up concrete blocks and gathering tree branches to throw toward the Polish side.

Loud bangs rang out over the crowds and a dense cloud of smoke hung overhead. Belarusian state media BeITA reported that the water cannons used by Polish forces sprayed a yellow liquid that caused burning, and that people were suffocating and feeling sick from the smoke. A CNN team was hit by the water fired by Polish guards.