Role of Government, Kansas, state legislatures, Media industry
Save for Later
From The Center 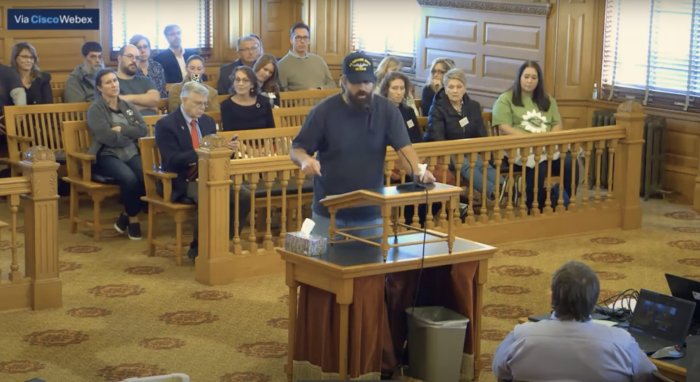 The Kansas State Legislature has altered video footage of a recent hearing to omit a profane rant targeting a journalist, raising questions about the editing of public records.

On Saturday, at a hearing held by the state’s Special Committee on Government Overreach and the Impact of COVID-19, Justin Spiehs testified before the committee to criticize mask and vaccine requirements. At the end of his testimony, he launched into a tirade against Kansas Reflector editor-in-chief Sherman Smith, telling him to “go f— yourself, you little b—-” and calling him a “snarky motherf—-er.”

Smith, who was not in the room, said his only contact with Spiehs had been over email. A few months ago, Spiehs asked the Reflector to cover his anti-mask protests outside of the Lawrence city public schools. Smith declined.

That Saturday afternoon, Smith watched the video of the hearing — rant included — on the Kansas Legislature’s website. But when he checked the website on Monday, the original recording was gone. The new video omits the tirade entirely.

The recording uploaded to the Kansas Legislature’s YouTube channel contains video footage of Spiehs’ entire speech, but the audio of his rant is missing. Instead, there is 28 seconds of silence.

NEWS
As President Biden negotiates the final size and scope of the Build Back Better Act with fellow Democrats, Senator Joe Manchin of West Virginia has emerged as a major hurdle to his agenda. The conservative Democrat and his family would potentially profit
Democracy Now

More News about Role of Government from the Left, Center and Right

News
As President Biden negotiates the final size and scope of the Build Back Better Act with fellow Democrats, Senator Joe Manchin of West Virginia has emerged as a major hurdle to his agenda. The conservative Democrat and his family would potentially profit
Democracy Now

Opinion
Separation of powers is supposed to stop tyranny. But is it eroding?
Deseret News

Analysis
Where Does Biden Get the Authority To Mandate Vaccination?
Reason

Opinion
Australia Traded Away Too Much Liberty
Conor Friedersdorf

Analysis
The Real Crimes Of Andrew Cuomo
The American Conservative

Opinion
Why Don’t They Believe Us?
Tablet Mag

Opinion
Why Ron DeSantis is more dangerous than Trump
MSNBC

Opinion
Liberals Hate That You Have Rights
Townhall