Biden heads into international climate negotiations with a weak hand

Climate Change, Environment, COP26, Joe Biden
Save for Later
From The Left 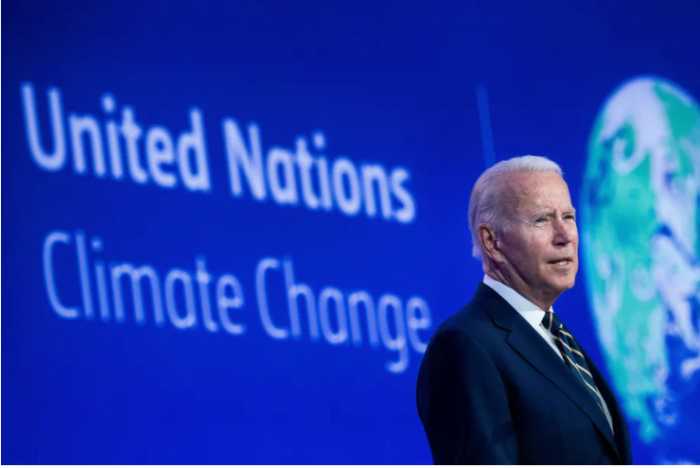 On the opening day of the 26th international climate conference in Glasgow, President Joe Biden’s pitch to the world was, more or less, to trust that the US would lead on the climate crisis. Biden originally hoped to arrive in Scotland with a pair of laws in hand that marked the US’s most significant investment ever in the climate crisis. Instead, he brought a smattering of executive actions and pledges, while his main agenda remains a moving target in Congress.

It’s almost exactly a year since the Trump administration officially, though temporarily, withdrew the US from the 2015 Paris climate agreement. Since Biden’s inauguration, the new administration has had nine months to piece together a plan for the climate negotiations in Glasgow that shows the US is making concrete progress on its domestic pollution.

The US has a singular responsibility to lead: It is second in global climate pollution after China, but far and away responsible for the largest share of cumulative emissions. Since 1850, the US has released a fifth of all carbon emissions, far ahead of every other country, according to an analysis by the research group Carbon Brief.

But US political polarization remains one of the biggest obstacles to global action. The US has never come to an international conference with a comprehensive climate agenda backed by Congress, mostly because Republican lawmakers have refused to negotiate on a serious action plan. So Democrats have banked on passing Biden’s climate plans in the Build Back Better agenda with a simple Senate majority. Their bet on reconciliation has put a good portion of Biden’s climate agenda in the hands of West Virginia Sen. Joe Manchin, who is personally invested in the coal industry.