Biden’s Visit to the Vatican 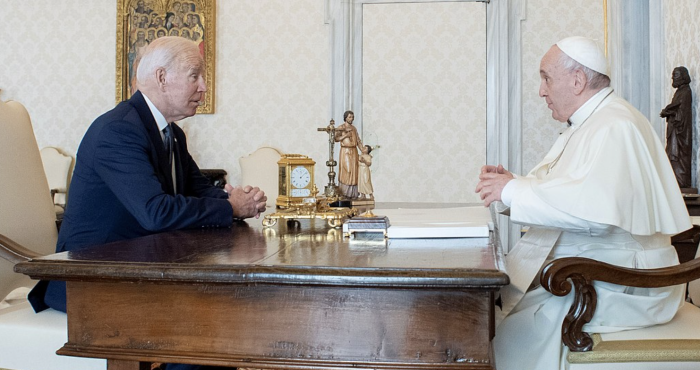 In the days of John F. Kennedy, the Democrats emphasized their political distance from the pope. Kennedy promised Americans that he would never let the pope influence him on “matters of public policy.” How times have changed. Today’s Democrats boast of their political alliance with Pope Francis. They openly confer with him on matters of public policy, as evident in Joe Biden’s latest visit to the Vatican. After he met with the pope last Friday, Biden praised him for “fighting the climate crisis, as well as his advocacy to ensure the pandemic ends for everyone through vaccine sharing and an equitable global economic recovery.”

Judging by press accounts, it appears that Biden and the pope didn’t discuss much beyond their shared left-wing politics. The pope looked famously glum at his meeting with Donald Trump. But the pictures from his meeting with Biden show a very warm exchange between the two. CNN noted the unusual length of Biden’s meeting with the pope: “The world’s most powerful Catholics — President Joe Biden and Pope Francis — renewed their close relationship on Friday, holding a 90-minute meeting that was twice as long as the one the President held with Pope John Paul II in one of his first meetings with a pontiff.”

Read full story
Some content from this outlet may be limited or behind a paywall.
Religion and Faith, Joe Biden, Pope Francis, Abortion, John F Kennedy, Democratic Party