Religion and Faith, Joe Biden, Pope Francis, Climate Change
Save for Later
From The Left 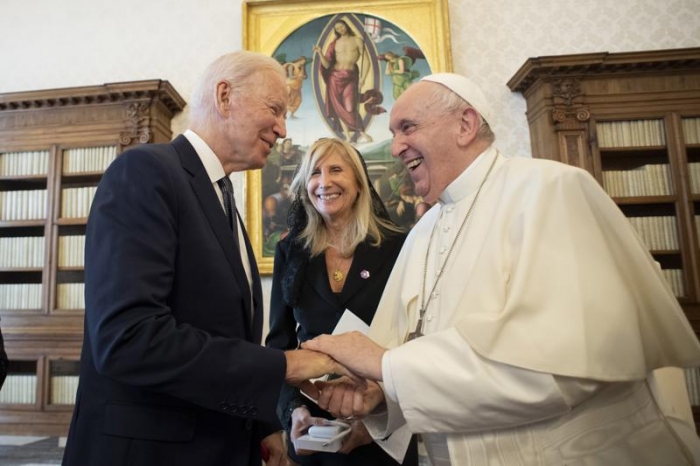 Sitting face to face across a desk, President Joe Biden and Pope Francis engaged in extended talks on climate change, poverty and the coronavirus pandemic Friday as the world’s two most prominent Roman Catholics ran overtime in highly personal discussions that also touched on the loss of president’s adult son and jokes about aging well.

Video released by the Vatican showed several warm, relaxed moments between Francis and Biden as they repeatedly shook hands and smiled. Francis often sports a dour look, especially in official photos, but he seemed in good spirits Friday. Their private meeting lasted about 75 minutes, according to the Vatican, an unusually long time for an audience with the pontiff.

The pair sat across from one another at a desk in the papal library, accompanied by a translator. They then proceeded to an exchange of gifts and a broader meeting including the first lady and top officials. The lengthy session put Biden more than an hour behind schedule for his later meetings.

“Biden thanked His Holiness for his advocacy for the world’s poor and those suffering from hunger, conflict, and persecution,” the White House said. “He lauded Pope Francis’ leadership in fighting the climate crisis, as well as his advocacy to ensure the pandemic ends for everyone through vaccine sharing and an equitable global economic recovery.”