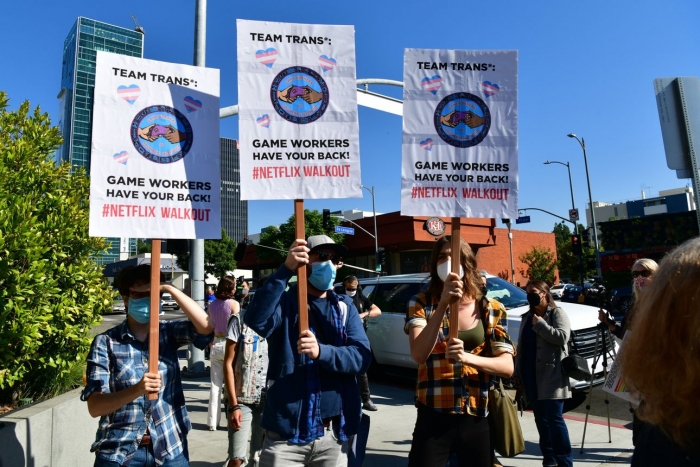 A group of protesters gathered outside one of Netflix Inc.’s NFLX -2.17% Los Angeles offices Wednesday to express anger over the streaming giant’s Dave Chappelle comedy special, as some employees released demands for management and staged a walkout.

In the special, “The Closer,” Mr. Chappelle made jokes and remarks regarding gender that many in the transgender community, including some Netflix staffers, found offensive. The company has defended the special, citing reasons including the company’s commitment to artistic freedom.

Carrying signs that read “Transphobia Isn’t Funny” and “Trans Lives Matter,” protesters demanded that Netflix offer more inclusive programming and be more sensitive to the effect its content can have on certain communities and society as a whole.

Some Netflix employees attended the event, but didn’t speak. Supporters of the comedian also showed up and tried to disrupt the proceedings.

Read full story
Some content from this outlet may be limited or behind a paywall.
Business, Culture, Arts and Entertainment, Dave Chappelle, comedy, Netflix, LGBT Rights, transgender issues

NEWS
Microsoft will buy Activision Blizzard, a bet on the next generation of the internet.
New York Times (News)

Analysis
Why conglomerates break themselves up
Axios