Economy and Jobs, unemployment, Joe Biden, vaccine mandates, coronavirus
Save for Later
From The Right 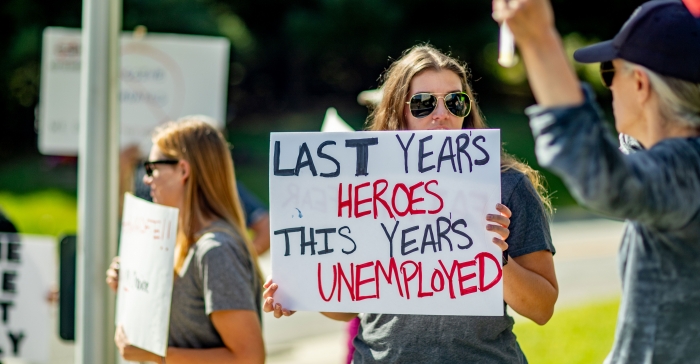 Despite $9 trillion in fiscal and monetary stimulus from the federal government, America has an employment problem.

The Labor Department estimates that 10.4 million jobs remained unfilled in August, the most recent month for which figures are available, including 1.5 million in health care and social services. That same month, a record-high 4.3 million people quit their jobs.

The government reported that 3.1 million fewer people were working or seeking work last month than in February 2020, before the COVID-19 pandemic began.

While September saw employment increases in retail, hospitality, construction, and some other industries, employment in...

HEADLINE ROUNDUP
US Will End Restrictions for Vaccinated International Travelers on Nov. 8

As the U.S. economy struggles to fully recover from the coronavirus pandemic, supply-chain disruptions across the country are driving up prices and leading to...

The Great Resignation Is Accelerating
OPINION

I first noticed that something weird was happening this past spring. In April, the number of workers who quit their job in a single month...

Child Tax Credit 2021: Here's when the fourth check will deposit

The fourth monthly payment of the enhanced Child Tax Credit is landing in bank accounts on Friday, with anti-poverty researchers pointing to the ongoing cash...

White House banking on another McConnell retreat over the debt ceiling

The latest weekly initial jobless claims dropped below 300,000 for the first time since the pandemic began, according to data released Thursday by the...

Is The US About To See A Rise In Foreclosures After Surge In September?

Foreclosures in the U.S. are ticking upward as programs designed to help homeowners stay in place during the COVID-19 pandemic begin to end....

At least one in four people quit their job this year, and the share could grow before the end of 2021, according to data from the people analytics firm...

US unemployment claims fall to lowest level since pandemic

The number of Americans applying for unemployment benefits fell to its lowest level since the pandemic began, a sign the job market is still improving even as...

Jobless claims fell below 300,000 last week for the first time since the Covid-19 pandemic began in 2020, a sign companies are holding tightly to their workers...

What you need to know about the supply chain bottlenecks

Supply chain snarls and labor shortages are driving prices higher and creating shortages as the economy struggles to adapt to a new phase of the coronavirus...

The number of Americans filing for unemployment benefits dropped to a new pandemic low last week, dipping below 300,000 for the first time since...

US inflation expectations surge to highest level since 2013

Americans' inflation fears skyrocketed to another record high in September, driven by the rising price for an array of consumer goods, according to a...