Beto O'Rourke takes shot at Matthew McConaughey: 'I don’t know how he feels about any of the issues'

Politics, Beto O'Rourke, Matthew McConaughey, Texas, 2022 Elections
Save for Later
From The Right 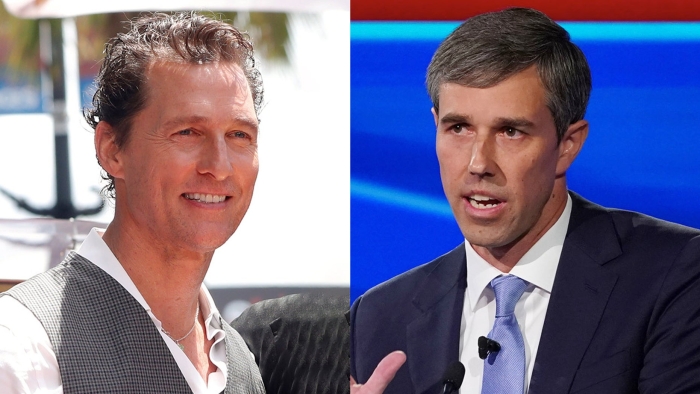 Texas Democrat Beto O'Rourke heaped praise on actor Matthew McConaughey in a new podcast but also took a shot at the possible gubernatorial candidate, who outpolled him in a recent survey.

Asked on The New York Times' "Sway" podcast if he was surprised by the numbers, O'Rourke said he wasn't but essentially called McConaughey a political chameleon.

"No. He’s an incredibly – if you’re talking about McConaughey – he’s a really popular figure whose political views have not in any way been fixed," the former presidential candidate said.

PERSPECTIVES BLOG
When the Political Center Starts to Matter Again

NEWS
In 2008, some Republicans claimed Obama was a Muslim. Colin Powell pushed back
NPR (Online News)

Senator Kyrsten Sinema, Democrat of Arizona and one of her party’s only holdouts on President Biden’s sprawling budget bill, has cultivated a profile in...

Garland: DOJ 'will apply the facts and the law' when considering Bannon referral

Attorney General Merrick Garland told lawmakers that the Justice Department "will apply the facts and the law and make a decision" when considering a criminal...

As citizens around the world continue to grapple with a global pandemic and the changes it has brought to their everyday lives, many are also expressing a...

Colin Powell and I were once Black Republicans. He taught me to put country over party.
OPINION

A patriot died Monday.  A man who proudly said, “I’m an American, first and foremost,” lived a life of integrity that stayed true to his statement. ...

In 2008, some Republicans claimed Obama was a Muslim. Colin Powell pushed back

The American statesman Colin Powell died on Monday due to complications from COVID-19. He was 84 years old. While many remember the four-star Army...

House Democrats will head into next year’s midterm elections trying to hold onto their majority in the chamber as several longtime members say they plan to...

We are living through the era of unpopular presidents. Just nine months into his term, President Joe Biden has already achieved something only predecessor...

In the early chapters of his letter to the Romans, St. Paul describes how humanity stands condemned before God’s law, guilty of falling short of the justice we...

Elections are about the future, so why are so many Republicans making next year’s midterms about the past? In races across the country, top Republican...

Many Americans are awakening to the fact that we seem to have no local control of a lot of local things: public schools, our terms of employment, local...