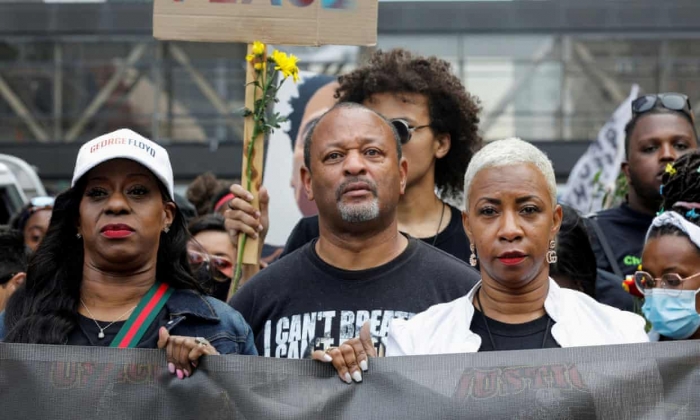 Bipartisan negotiations in the US Congress over a police reform bill that was prompted by the killing of George Floyd have collapsed.

“We did the best we could,” the Democratic congresswoman Karen Bass told reporters on Wednesday.

The House passed the George Floyd Justice in Policing Act in March, and Bass and the Democratic senator Cory Booker have since been working with the Republican senator Tim Scott to try to reach a bipartisan agreement on a bill that could pass the Senate.

But the talks dragged on for months with negotiators remaining at odds over...

Fact Check
Rittenhouse Testified He Drove Himself to Kenosha Without Weapon
FactCheck.org

News
Rittenhouse Trial
The Flip Side

News
A Union Scandal Landed Hundreds of NYPD Officers on a Secret Watchlist. That Hasn’t Stopped Some From Jeopardizing Cases.
ProPublica

Analysis
He Calls Himself the ‘American Sheriff.’ Whose Law Is He Following?
Politico

News
Do police belong in America's schools?
Yahoo! The 360

News
A Maryland judge died from an 'apparent suicide' before he could be arrested over accusations of using a hidden camera on underage boys, officials say
Insider

News
Cop Was Instructed to Use Music to Disrupt Filming
Vice