US Military, Mark Milley, Joint Chiefs of Staff, China
Save for Later
From The Right 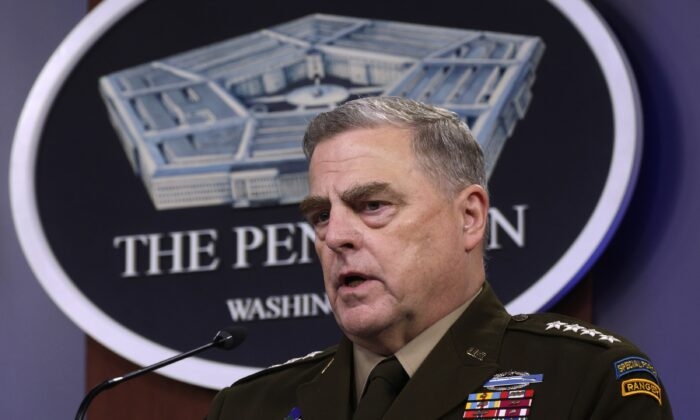 Faced with calls to resign or an investigation, Joint Chiefs of Staff Chairman Mark Milley on Friday defended two phone calls he allegedly made in secret to his Chinese Communist Party counterpart.

The general reached out to Gen. Li Zuocheng of the People’s Liberation Army several days before the November 2020 election and two days after the Capitol breach on Jan. 6 to reassure the Chinese army that an attack isn’t incoming, according to excerpts of a book that was published this week.

Milley, the top U.S. general, described the two phone calls as “routine” and claimed they were done “to reassure both allies and adversaries in this case in order to ensure strategic stability,” reported The Associated Press. When speaking to the news agency, he only offered a brief comment about his two calls with Li and said he will speak about his calls in front of Congress later this month when both he and Pentagon chief Lloyd Austin are scheduled to testify.

“I think it’s best that I reserve my comments on the record until I do that in front of the lawmakers who have the lawful responsibility to oversee the U.S. military,” Milley told AP. “I’ll go into any level of detail Congress wants to go into in a couple of weeks.”

Read full story
Some content from this outlet may be limited or behind a paywall.
US Military, Mark Milley, Joint Chiefs of Staff, China