Dems prepare to fight their own over $3.5T megabill

US Congress, Federal Budget, budget reconciliation, House Democrats, Senate Democrats
Save for Later
From The Left 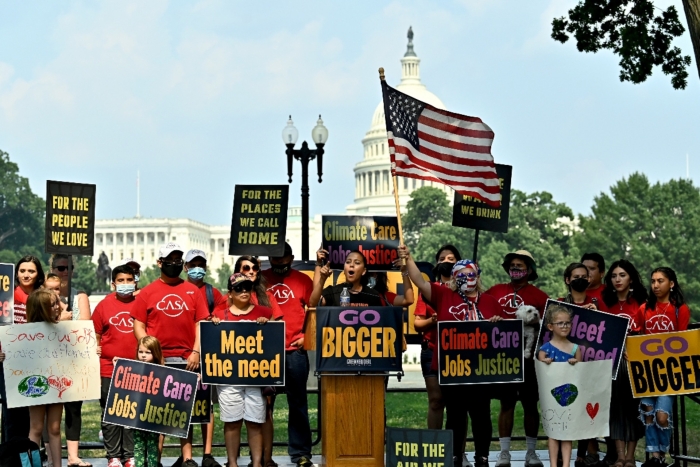 This fall marks progressives' biggest chance in years to advance their top political priorities. And their off-the-Hill allies are gearing up for an intraparty showdown.

Top Democrats are pushing to resolve lingering House-Senate disputes and have the text of their massive social spending plan ready by Sept. 15 before passing that entire bill on party lines by Sept. 27. That's the deadline Speaker Nancy Pelosi has set for a House vote on the bipartisan physical infrastructure bill the Senate passed in August — giving progressive groups only weeks to defend key elements of the up-to-$3.5 trillion package such as child care incentives and climate change action.

The party's outside activists are already planning to spend big and escalate their messaging. But matters are trickier on the Hill, where progressive lawmakers are on a collision course with Democratic centrists resistant to a price tag as high as $3.5 trillion.

Unlike their House colleagues, liberal senators are refraining from publicly criticizing their centrist counterparts, even though both Sens. Kyrsten Sinema (D-Ariz.) and Joe Manchin (D-W.Va.) have raised serious concerns with the $3.5 trillion number. Senate Budget Committee Chair Bernie Sanders (I-Vt) Thursday evening reiterated that there would be "no infrastructure bill without the $3.5 trillion reconciliation bill" in response to an op-ed from the West Virginia Democrat about the bill, but did not mention Manchin by name.

Even so, House Democrats could end up picking the fight by opposing the bipartisan infrastructure measure this month if the social spending bill isn't done. That's exactly what one prominent outside group, Indivisible, is steeling their spines for.