Since Platform-by-Platform Censorship Doesn't Work, These Researchers Think, the Government Should Help 'Halt the Spread of Misinformation' 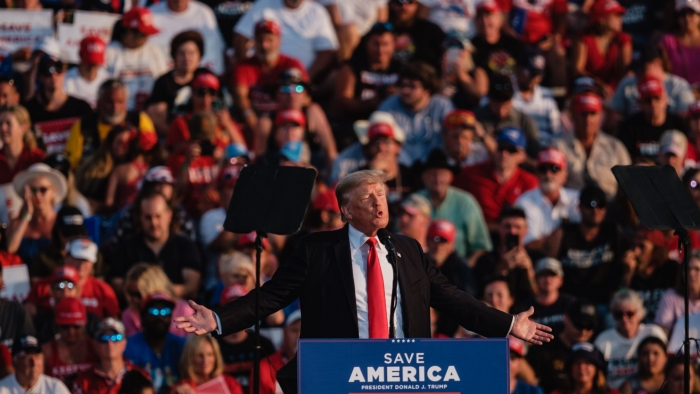 Before Twitter banned then–President Donald Trump in response to the January 6 Capitol riot, the platform tried to police his false claims about election fraud by attaching warning labels or blocking engagement with them. A new study suggests those efforts were ineffective at preventing the spread of Trump's claims and may even have backfired by drawing additional attention to messages that Twitter deemed problematic.

Those findings highlight the limits of content moderation policies aimed at controlling misinformation and, more generally, the futility of responding to lies by trying to suppress them. But the researchers think their results demonstrate the need to control online speech "at an ecosystem level," with an assist from the federal government.

The study, published today in Harvard's Misinformation Review, looked at Trump tweets posted from November 1, 2020, through January 8, 2021, that Twitter flagged for violating its policy against election-related misinformation. Zeve Sanderson and four other New York University social media researchers found that tweets with warning labels "spread further and longer than unlabeled tweets." And while blocking engagement with messages was effective at limiting their spread on Twitter, those messages "were posted more often and received more visibility on other popular platforms than messages that were labeled by Twitter or that received no intervention at all."

Read full story
Some content from this outlet may be limited or behind a paywall.
Free Speech, Facts and Fact Checking, online censorship, Big Tech, Technology, Social Media, misinformation and disinformation, fact checking