The staggering, exhausting, invisible costs of caring for America’s elderly

elder care, Healthcare, Inequality
Save for Later
From The Left 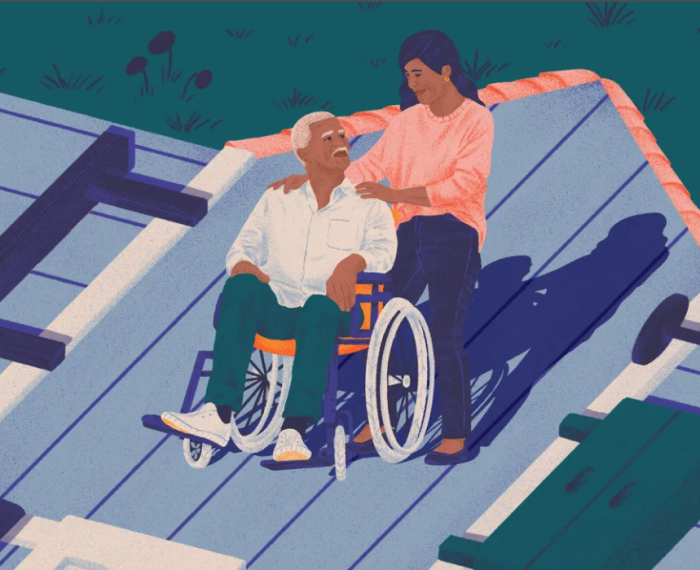 As millions “age in place,” millions more must figure out how to provide their loved ones with increasingly complex care.

When Laura sent me an email in early August, the first thing she did was apologize. “Please excuse how inelegant and disjointed this will be,” she wrote. “It matches my brain after being a caregiver since 2013.”

In 2013, Laura was several decades into a career as a marketing consultant. Her work was rewarding and challenging; she felt like she got to be creative every day and was never bored. She had gone freelance in the early 2000s and reveled in the freedom of being her own boss. Then her 78-year-old mom began experiencing severe back pain. She was scheduled for surgery, but the symptoms only worsened after the procedure. She was soon rushed back to the hospital following the collapse of her spinal cord. After emergency surgery, her pain lessened, at least somewhat, but then Laura was left to deal with her mom’s quickly accelerating dementia. “She went from normal cognition to thinking it was her wedding day and that I was her mother,” Laura told me. “She didn’t know how to walk, and didn’t remember what had happened to her.”

According to elder care experts, Laura’s description of what happened to her mom is pretty common. As someone ages, their health appears to gradually deteriorate in a way that doesn’t seem alarming. Most of the time, though, they’re inching toward a cliff — and when they fall off, they find themselves on another health cliff, and another, and another. With each cliff, it gets more difficult for a family member to catch them.

Some older adults have diligently prepared for their future. They purchased long-term care insurance when it was still affordable, then paid the premiums each month, even as they continued to rise. This is not the norm. Many adults have no plan at all, or assume that Medicare, which currently kicks in at age 65, will cover their health costs. Medicare, however, doesn’t cover the long-term daily care — whether in the home or in a full-time nursing facility — that millions of aging Americans require. For that, you either need to pay out of pocket (the median yearly cost of in-home care with a home health aide in 2020 was $54,912, and the median cost for a private room in a nursing home was $105,850) or have less than $2,000 in assets so that you can qualify for Medicaid, which provides health care, including home health care, for more than 80 million low-income Americans. Even if you qualify, the waiting list for home care assistance for those with Medicaid tops 800,000 people and has an average wait time of more than three years.