Media industry, Joe Biden, Afghanistan, Media Bias
Save for Later
From The Right 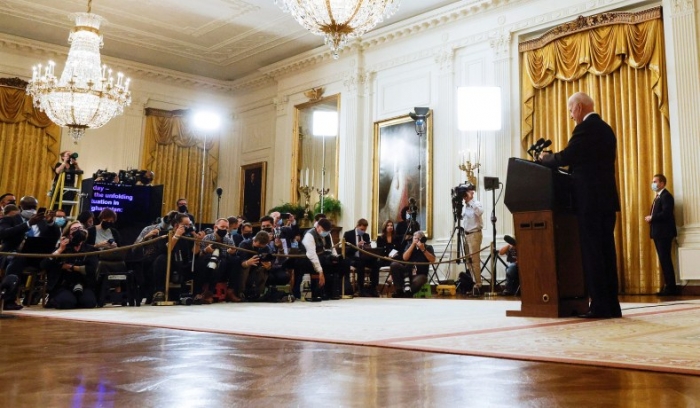 Amid the Afghanistan debacle, Team Biden is caught flat-footed as, for once, a typically compliant press holds him to account.

It’s not a good sign when a White House chief of staff to a Democratic president wants to retweet favorable news coverage and all he can find is the least credible and most slavishly loyal commentators on the Internet.

The Afghanistan fiasco has created that most disorienting and discomfiting experience for a progressive administration — a serious bout of critical media coverage immune to White House spin and determined to tell the unvarnished story of an ongoing debacle.

The White House and its allies have lashed out at what they are portraying as an insular, pro-war media ignoring its many successes in the Afghan evacuation.

This, like Ron Klain’s tweeting, is a sign of desperation and of a feeling of outraged betrayal that usually dependable allies have, on this story, switched sides. Say it’s not so, CNN.

The White House is unfamiliar with what it’s like to be on the receiving end of the kind of media feeding frenzy that Florida governor Ron DeSantis experiences every other day (almost always involving spurious storylines).

But on Afghanistan, Joe Biden in effect set out to test how much shameless incompetence and dishonesty the media would accept. The answer? Not nearly enough.

The press is blatantly biased and has become even more so over time, repeatedly propagating false narratives that have shredded its credibility. Still, there are limits beyond which even it can’t be pushed.

Read full story
Some content from this outlet may be limited or behind a paywall.
Media industry, Joe Biden, Afghanistan, Media Bias

The media wants to paint Joe Biden as a failure. He won’t let that happen.
Jennifer Rubin