Safety and Sanity During COVID-19, Chuck Schumer
Save for Later
From The Left 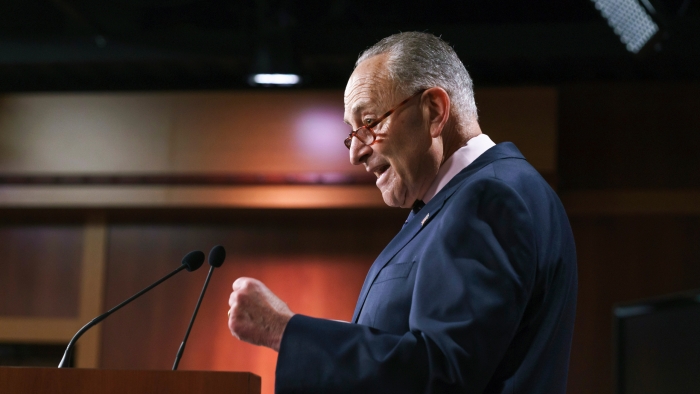 Sen. Chuck Schumer’s announcement Sunday comes after The Associated Press reported how people are cheating the system and buying counterfeit COVID-19 vaccination cards online, worrying officials at colleges and universities across the country that are requiring proof students received the vaccine to attend in-person classes.

Schumer is demanding U.S. Customs and Border Protection and the FBI team up with officials from the Department of Health and Human Services to launch a crackdown on the counterfeit cards and start a campaign to make clear that forging the cards could land people in federal prison.

He also wants the Justice Department to immediately prioritize cases involving fake vaccine cards and is pushing for Customs and Border Protection to work harder to find counterfeit cards being sent from overseas.

NEWS
Most Parents Want Their Kids Back In The Classroom. Fewer Agree On The COVID-19 Safety Measures.
FiveThirtyEight

More News about Safety and Sanity During COVID-19 from the Left, Center and Right

Getting exposed to another coronavirus can help you fight COVID-19, study says
Deseret News

News
V IS FOR VACCINE: CNN and Sesame Street host town hall encouraging kids ages 5 to 11 to get vaccinated
The Post Millennial

News
Covid Hospitalizations Dip, But More Than Half Of States Have Almost No ICU Beds Open
Forbes

Opinion
Why Did the Staff at the Met Wear Masks, While the Celebrities Went Without?
National Review

Opinion
As COVID Surges, We’re Not in the Endgame, We’re Mired in Uncertainty
Mother Jones

News
Most Parents Want Their Kids Back In The Classroom. Fewer Agree On The COVID-19 Safety Measures.
FiveThirtyEight

Analysis
Fentanyl Is Creeping Into the Mainstream Drug Supply
Vice

Analysis
No, Biden Isn’t Letting Thousands of ‘Illegal Immigrants’ into US Without COVID Testing
Snopes

News
Who can ask about your vaccine status? Here’s what you need to know about HIPAA
PBS NewsHour

News
Over 400 Florida students have to quarantine after just the second day of school. Thousands of families have since opted out of wearing masks.
Insider

News
Florida and Texas are seeing more kids under 18 hospitalized with COVID-19 than any other state. Mask mandates in schools are banned.
Insider

News
Some in U.S. Getting COVID-19 Boosters Without FDA Approval
Time Magazine

News
Even for vaccinated people, now is the time for masks and testing, public health experts say
NBC News (Online)

Analysis
“We Can’t Trust the Unvaccinated”: Dr. Leana Wen on Vaccine Mandates & How to Stop the Delta Variant
Democracy Now

News
'I thought I did everything right': The fully vaccinated are frustrated by CDC's changing mask advice
USA TODAY

Analysis
Covid Hospitalizations Tick Up Across U.S. Due To Delta Variant — These 17 States Are Leading The Way
Forbes

News
Should masks be required when kids return to school?
Yahoo! The 360