‘We have the votes’: Senate advances Biden’s $1.2 trillion infrastructure deal

US Senate, infrastructure bill, bipartisanship
Save for Later
From The Right 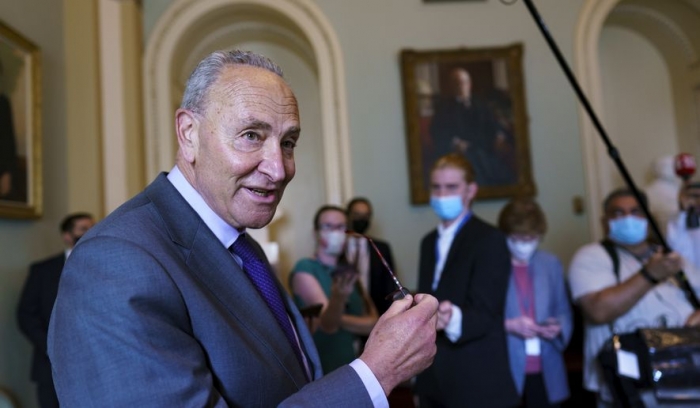 The Senate voted to advance President Biden’s $1.2 trillion infrastructure package on Wednesday, only hours after a bipartisan group of lawmakers finalized the deal.

In a 67-32 vote, the chamber advanced the bill in a crucial test vote. The legislation cleared the 60-vote hurdle with 17 Republicans joining all 50 Senate Democrats.

The pace was quicker than the usually plodding Senate as lawmakers prepared to leave Washington for a month-long summer break.

Read full story
Some content from this outlet may be limited or behind a paywall.
US Senate, infrastructure bill, bipartisanship

Go ad-free! Support AllSides.
About these ads
More news about US Senate
https://www.washingtontimes.com/news/2021/jul/28/we-have-votes-schumer-barrels-towards-vote-12-tril/

The Senate passed a $3.5 trillion budget blueprint early Wednesday, the first step in an arduous process designed to allow Democrats to push through...

Sen. Joe Manchin on Wednesday morning said he has "serious concerns" about his party's massive $3.5 trillion spending plan, signaling that he may...