US House, Nancy Pelosi, January 6 Commission
Save for Later
From The Left 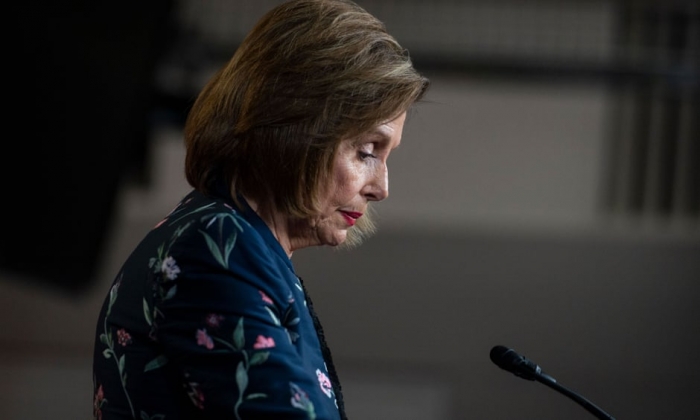 Speaker is locked in a battle of wills with Kevin McCarthy who is determined to change the political conversation, critics say

It was, Nancy Pelosi told reporters on Thursday, one of the darkest days in America’s history – an assault on democracy, Congress and the constitution. “The American people want to know the truth,” she said.

But will the truth of the 6 January insurrection at the US Capitol ever be fully told?

Pelosi, the Democratic speaker of the House of Representatives, finds herself locked in a battle of wills with Kevin McCarthy, the...

Go ad-free! Support AllSides.
About these ads
https://www.theguardian.com/us-news/2021/jul/23/nancy-pelosi-kevin-mccarthy-capitol-attack
More news about US House

The House on Thursday overwhelmingly approved $1 billion in new funding for Israel’s Iron Dome missile defense system, after a debate that exposed...

Republicans are trying to gerrymander themselves into control of the House of Representatives — and they very well might succeed. A seat in Tennessee here,...

Speaker Nancy Pelosi (D-Calif.) has signaled to colleagues in both chambers that she will not put the $3.5 trillion budget reconciliation package on...

An outside ethics group on Wednesday filed ethics complaints against seven U.S. House lawmakers — four Democrats and three Republicans — for failing to report...

How Many House Republicans Who Voted To Impeach Trump Will Survive The Midterms?
ANALYSIS

Last Thursday, Republican Rep. Anthony Gonzalez of Ohio announced he would not seek reelection in 2022. The 37-year old congressman was one of...

House Democrats unveiled legislation on Tuesday that would keep the federal government funded through Dec. 3 and suspend the debt limit into next...

Rep. Marjorie Taylor Greene on Friday sparked a shouting match with a pair of Democratic lawmakers outside the Capitol, prompting one of them to scream that...

The Democratic-controlled House of Representatives on Thursday passed its version of a $768 billion defense policy bill for the 2022 fiscal year. The vote...

House Republican Leader Kevin McCarthy (R-Calif.) said he'll vote against the so-called bipartisan infrastructure bill when it comes up for a vote on Monday,...

Republicans File 3 Articles of Impeachment Against Biden: 'Shot Across the Bow'

Several Republican House members are calling for the impeachment of President Biden, based on "clear violations of his duties as president." They admit the...