Migrant arrests at southern border rose yet again in June to 188,000, topping 1M this fiscal year

Immigration, border wall, Joe Biden, Kamala Harris
Save for Later
From The Right 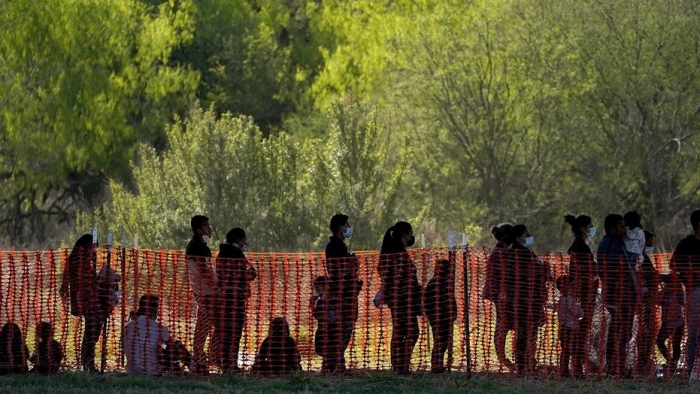 There were nearly 190,000 migrant encounters at the southern border in June, Customs and Border Protection (CBP) announced Friday — yet another rise in what were already sky-high border numbers, and bringing the total of encounters in fiscal year (FY) 2021 to more than 1 million.

CBP said that 188,829 migrants were encountered at the southern border, an increase from the 180,034 encountered in May. It is also a sharp rise since when President Biden took office — there were 78,442 encounters in January.

WASHINGTON – For decades, lawmakers and immigrant advocates have been working to pass immigration reform on Capitol Hill, often looking to pass bipartisan...

Franklin Anchaua cleared thick layers of dust in offices, apartments and even in a chapel in lower Manhattan for weeks after the Sept. 11 attacks. At first...

The Afghans evacuated by the United States have escaped the Taliban, but they still face a humanitarian emergency. These are refugees experiencing stunning...

An Iowa town goes to battle for Afghan immigrant

At first glance, Iowa Falls might be an uncomfortable place for a devout Muslim. Pork, forbidden in Islam, is big business here, and there isn't a mosque for...

Ex-Pence Aide: Stephen Miller’s “Racist Hysteria” Made It Harder for Afghan Allies to Get Visas

As thousands of people in Afghanistan attempt to flee the country before the United States’ withdrawal on August 31, we look at how the Trump administration...

More than 10 million U.S. citizens share a household with an undocumented immigrant, according to a new analysis of Census Bureau data by immigration...

President Biden is struggling with a Gordian knot on immigration that there's little he can do to untangle: The nation's broken system is making it harder than...

Majority of Americans Support Resettling Afghan Refugees in the US: Poll

While some Americans have voiced their opposition to resettling Afghan refugees in the United States, a majority support the effort. According to a new...

The U.S. government has lost contact with thousands of migrant children released from its custody, according to data obtained by Axios through a Freedom of...

With toasters and empathy, former refugees welcome Afghans to US

For many Americans, it’s difficult to imagine what the tens of thousands of newly arrived Afghan refugees are going through.  But Arshad Mehmood doesn’...

Migrant encounters reportedly exceed 200,000 for second month in a row

More than 200,000 illegal immigrant encounters have been reported in August — the second straight month the number has exceeded that mark — in an extension of...

Texas to award border wall contract as early as this week

Texas may award a massive contract to begin building a barrier that stretches along more than 700 miles of the state’s border with Mexico as early as...

President Biden announced a sweeping plan that could force millions of unvaccinated Americans to get the COVID-19 shot but left out mandating...

Why We Can Accept Afghan Refugees, and Should
OPINION

If you don’t imbibe the noxious prattle-on-demand that calls itself cable television “news,” you might not realize that a crew of pundits and talking...