World, Cuba protests, Taxes
Save for Later
From The Center 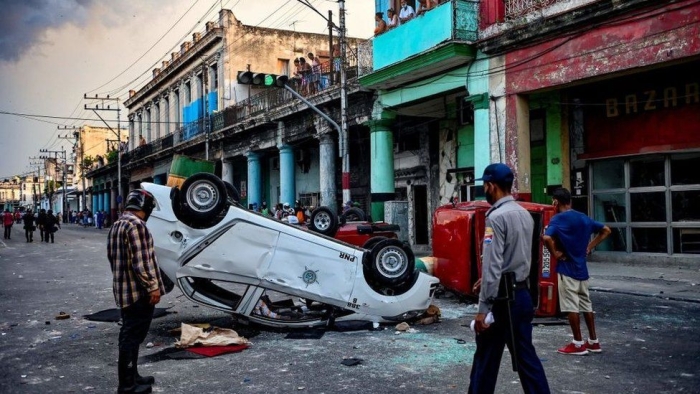 Cuba says it will allow travellers arriving in the country to bring in food, medicine and other essentials without paying import duties.

The announcement was made following the biggest anti-government protests on the Communist-run island in decades.

Thousands took to the streets on Sunday to protest over food and medicine shortages, price increases and the government's handling of Covid-19.

There will be no limit on such goods brought in by travellers from Monday.

However, the measure is only temporary and has been derided as "too little, too late" by critics...

NEWS
Taliban leaders reportedly got into major brawl over who did the most to expel US from Afghanistan, who deserves cabinet positions. One prominent leader hasn't been seen since.
TheBlaze.com

In his new book, Yale historian Samuel Moyn explores whether the push to make U.S. wars more “humane” by banning torture and limiting civilian casualties has...

In much of the world, economic policy is becoming tighter
ANALYSIS

INFLATION, IT IS often said, is a matter of too much money chasing too few goods. In many places that has been 2021 in a nutshell. Resurgent demand collided...

The Taliban have denied that one of their top leaders has been killed in a shootout with rivals, following rumours about internal splits in the movement nearly...

Rebeca Persson remembers clearly the afternoon in October 2018 when she and other Malmö residents first met with 10 young men – many from rival street gangs,...

The Taliban announced the members of its interim government Tuesday for the newly-formed “Islamic Emirate of Afghanistan” one week after the U.S. completed its...