Trump: July 4 'Will Not Be Canceled,' Nor 'Purged From History' or 'Our Hearts'

Donald Trump, Independence Day, patriotism, Holidays
Save for Later
From The Right 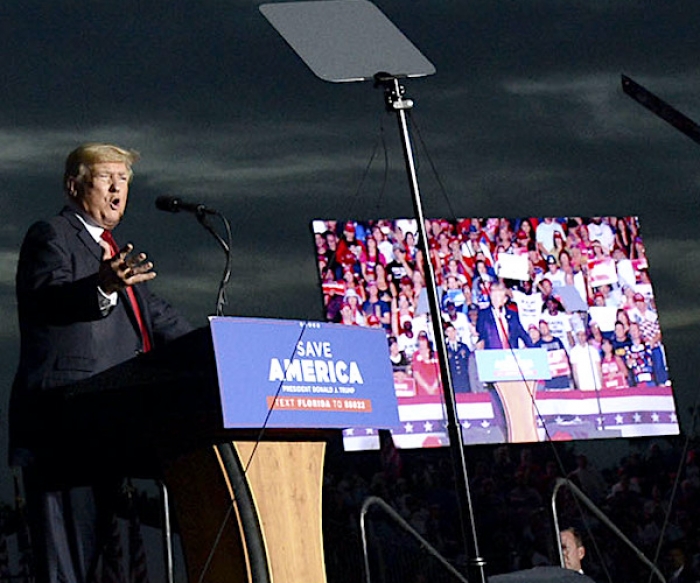 Delivering a message of patriotism on the eve of the July 4 holiday, former President Donald Trump vowed "it will not be canceled," and American founders and patriots "will never be purged from history or canceled from our hearts."

"Tomorrow we will celebrate 245 years of glorious American Independence: It will not be canceled, by the way," Trump told his Save America rally Saturday night in Sarasota, Florida, which aired live on Newsmax. "And we will teach young people across the country that George Washington, Abraham Lincoln, Thomas Jefferson. John Adams, Benjamin Franklin, John Hancock will forever be American heroes."

"People want to take their names off buildings," Trump continued. "Can you believe it? They took names of buildings like George Washington. And I told you this is where they're coming from.

"We're not going to let that happen. They will never be purged from history or canceled from our hearts."

"If Biden and the radical Democrats get their way, you can kiss your suburbs, tour fourth of July, your barbecue, and you can kiss the American dream goodbye," Trump said later.

Trump added a vow to continue the tradition of the July 4 holiday, as the Biden administration blocked a fireworks display over Mount Rushmore in South Dakota that GOP Gov. Kristi Noem fought to deliver as her state did last year with Trump as president.

Read full story
Some content from this outlet may be limited or behind a paywall.
Donald Trump, Independence Day, patriotism, Holidays

More News about Holidays from the Left, Center and Right

How Advent Teaches Us, Amid Sorrow, To Rejoice
The Federalist

News
Vaccinated and test positive? What to know about omicron, COVID for this holiday season.
USA TODAY

Opinion
Looking for Gratitude in an Ungracious World
National Review

News
After decades, Opal Lee finally gets her day off
BBC News

Opinion
Juneteenth Is a Good Holiday. Of Course the Government Is Screwing It Up.
Reason

News
After losing their moms to COVID-19, some would rather Mother's Day not 'exist at all'
USA TODAY

Opinion
On This Presidents’ Day, Let’s Remember Most of Them Were Terrible
National Review

Analysis
Who Was St. Valentine? Separating The Man From The Myth.
The Daily Wire

News
For Valentine’s Day, 5 facts on relationships and dating in the U.S.
Pew Research Center