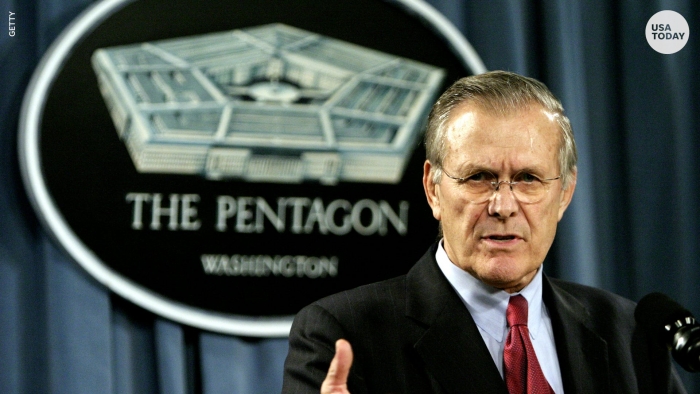 The death of Donald Rumsfeld – Republican powerbroker, controversial Defense Secretary and architect of the Iraq war – days before his 89th birthday from multiple myeloma has drawn reaction from lawmakers, presidents and more.

Here is a look at how he is being remembered:

In a statement Wednesday, former President George W. Bush lauded Rumsfeld, who served as Bush's defense secretary, as a "faithful steward of our armed forces."

"A period that brought unprecedented challenges to our country and to our military also brought out the best qualities in Secretary Rumsfeld," the statement reads. "A...

Read full story
Some content from this outlet may be limited or behind a paywall.
defense department, Donald Rumsfeld, Republican Party, Iraq War

Defense Secretary Lloyd Austin is expected to seek authorization to make Covid-19 vaccines mandatory for all active duty troops as soon as this week, following...

The only thing tragic about the death of Donald Rumsfeld is that it didn’t occur in an Iraqi prison. Yet that was foreordained, considering how...

'Be aware': The Pentagon's target list for extremist infiltrators — right and left

Flags from the left-wing Antifa movement. Depictions of Pepe the Frog, the cartoon character that's been misappropriated by racist groups. Iconography from the...

Pentagon on wretched conditions for Afghans at Qatar base: "Nobody’s making excuses"

Pentagon spokesperson John Kirby said Tuesday that "nobody is making excuses" and "everybody's focused on trying" to improve the conditions at the Qatar air...

The Pentagon said Tuesday it canceled a disputed cloud-computing contract with Microsoft that could eventually have been worth $10 billion. It will instead...

Donald Rumsfeld, The Controversial Architect Of The Iraq War, Has Died

Donald Rumsfeld, the longtime military thinker and Washington powerbroker who served twice as secretary of defense, has died. He was 88 years old. Rumsfeld'...

Congress delivered a stinging rebuke to President Trump during a rare New Year's Day session Friday, handing him his first veto override in the final days of...

Two Republican legislators are calling for Amazon to testify under oath about its connections to the Pentagon and the company’s attempts to secure a $10...

It is one of the irritating defects of genius that, particularly when surrounded by crushing mediocrity, the audacity of having ideas becomes a source of...