Critics Warned the Largest Tax Increase in San Francisco History Would Be Ill-Spent. It's Now Funding $60,000 Tents for the Homeless.

Economic Policy, Taxes, Housing and Homelessness, California, San Francisco, Welfare
Save for Later
From The Right 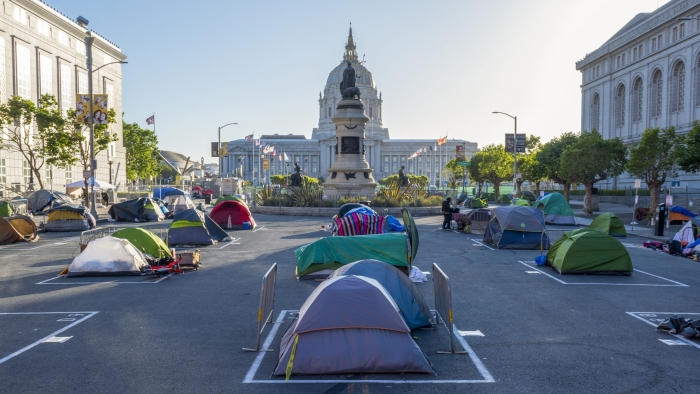 When San Francisco voters were considering a 2018 ballot measure that would impose the largest tax increase in city history to fund homelessness services, critics warned that the initiative's spending plan was vague and unaccountable. Now, a chunk of that money is going to fund some very expensive tents.

On Wednesday, staff for the city's Department of Homelessness and Supportive Housing went before the Board of Supervisors' Budget and Appropriations Committee to request $20 million over the next two fiscal years to continue operating six "safe sleeping" tent encampments.

This safe sleeping program was launched early in the pandemic as a way of getting people out of crowded shelters, and into open-air, socially distanced camping sites where the homeless had access to showers, meals, and around-the-clock security.

The total cost of the program in its first year was roughly $18.2 million for around 260 tents, which the San Francisco Chronicle notes is about $61,000 per tent per year or twice the median cost of an apartment in the city.

Those high costs, and city staff's proposal to continue funding what was supposed to be a temporary, pandemic-era program, raised eyebrows among supervisors at Wednesday's meeting.

Read full story
Some content from this outlet may be limited or behind a paywall.
Economic Policy, Taxes, Housing and Homelessness, California, San Francisco, Welfare