Transportation, Infrastructure, Joe Biden, Domestic Policy
Save for Later
From The Right 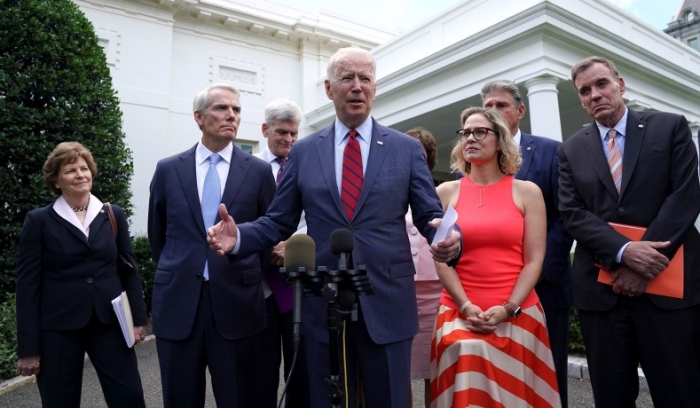 Last month, we warned Republicans about the pitfalls of indulging President Biden’s infrastructure fantasies. The bipartisan framework announced Thursday isn’t causing us to change our mind.

There is much to dislike about the so-called compromise proposal (even putting aside the minor detail that the nation’s infrastructure is not, in fact, in dire need of repair). The deal negotiated by a group of five Republicans and five Democrats would mean $579 billion in new spending that, when slapped on top of what the federal government is already slated to spend on infrastructure, could mean $1.2 trillion in outlays over the next eight years. In a year when the White House expects U.S. debt as a share of the economy to be the highest in American history, the plan is vague about how everything will be paid for. A White House “fact sheet” touting the plan has a line-by-line breakdown of the various new spending initiatives along with descriptions, but only bullet points on the proposed financing mechanisms, without any dollar amounts. Those bullet points include lines such as, “State and local investment in broadband infrastructure” and “Repurpose unused relief funds from 2020 emergency relief legislation.” Additionally, the plan lists “Reduce the IRS tax gap” and “Unemployment insurance integrity.” In other words, they couldn’t get the numbers to add up, so they went for the old Washington standby of combating waste, fraud, and abuse.

While this framework deserves to be rejected on the substance alone, it doesn’t get to the heart of the matter, which is that this entire process is a charade. Democrats have made their plans very clear. They want to move the bipartisan plan through the Senate on a parallel track with a reconciliation bill stuffed with liberal wish-list items that will be rammed through on a pure party-line basis.

Senate Majority Leader Chuck Schumer said both bills would be moved through the Senate next month, and Speaker Nancy Pelosi said the House would not even consider acting on the bipartisan bill unless the far-left one also passes the Senate.

Read full story
Some content from this outlet may be limited or behind a paywall.
Transportation, Infrastructure, Joe Biden, Domestic Policy