After decades, Opal Lee finally gets her day off

Holidays, race and racism, Juneteenth
Save for Later
From The Center 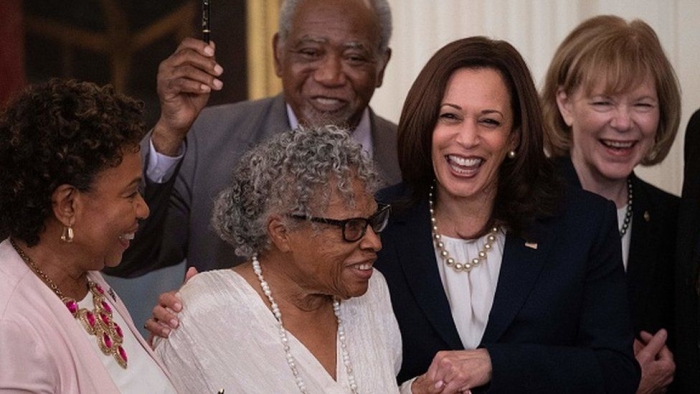 Opal Lee was 12 when a mob of white supremacists vandalised and set fire to her family's home in Fort Worth, Texas.

Helpless, she watched her home burn to the ground as police stood by, doing nothing to stop the violence.

The attack happened in 1939 on 19 June, a symbolic date that commemorates the end of slavery in the US.

Known as Juneteenth, the date would leave a lasting impression on Ms Lee, who channelled her experiences of racism into a life of teaching, activism and campaigning.

"The fact that [the attack] happened on the 19th day of June has spurred me to make people understand that Juneteenth is not just a festival," she told Fort Worth Star-Telegram newspaper in February.

"It should be a unifier. The slaves didn't free themselves."

For decades, Ms Lee worked tirelessly to get Juneteenth recognised as a national holiday in the US.

NEWS
To avoid Covid, here are four questions to ask family and friends ahead of Thanksgiving gatherings
CNN (Online News)

More News about Holidays from the Left, Center and Right

Opinion
Looking for Gratitude in an Ungracious World
National Review

News
Trump: July 4 'Will Not Be Canceled,' Nor 'Purged From History' or 'Our Hearts'
Newsmax (News)

Opinion
Juneteenth Is a Good Holiday. Of Course the Government Is Screwing It Up.
Reason

News
After losing their moms to COVID-19, some would rather Mother's Day not 'exist at all'
USA TODAY

Opinion
On This Presidents’ Day, Let’s Remember Most of Them Were Terrible
National Review

Analysis
Who Was St. Valentine? Separating The Man From The Myth.
The Daily Wire

News
For Valentine’s Day, 5 facts on relationships and dating in the U.S.
Pew Research Center

Opinion
Looking forward to 2021, with some wishes
Scott Walker

Opinion
Forget 2020 and just move on? No so fast. Do this first
Fox News (Opinion)

Opinion
The Republican party has ushered in a dark Christmas, indeed. We deserve better
The Guardian

News
Coronavirus has altered Christmas. But in a few countries, it looks a little like normal.
Washington Post

Opinion
I traveled for Christmas, and I'm not sorry
Washington Examiner