Mark And Patricia McCloskey Plead Guilty To Misdemeanors, Agree To Give Up Guns

Criminal Justice, Guns, George Floyd protests
Save for Later
Add to My Front Page
From The Right 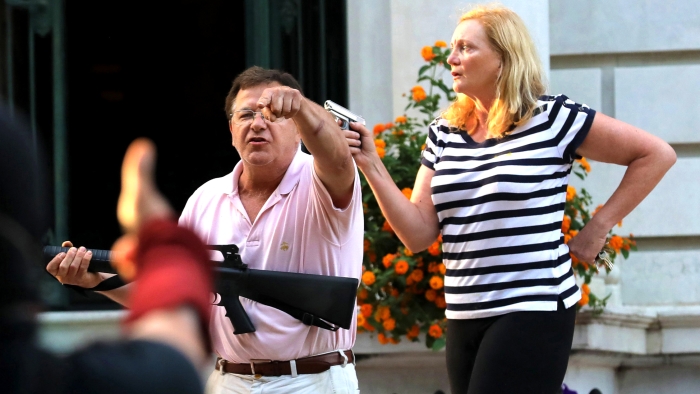 Mark and Patricia McCloskey, the St. Louis, Missouri, couple that went viral after confronting Black Lives Matter protesters on their own front lawn, pleaded guilty to misdemeanors, Thursday, and agreed to turn over their personal weapons to St. Louis authorities.

Local news reports that the pair, who were originally charged with felonies, inked the plea deal with prosecutors earlier this month despite previously pleading not guilty. A judge approved the plea deal on Thursday.

Read full story
Some content from this outlet may be limited or behind a paywall.
Criminal Justice, Guns, George Floyd protests

Nakisha Billa’s son was still a baby when she decided to make their first flight to safety. It was early in 2000 and she and Domonic were living in the North...

Can Biden Finish What Obama Started And Close Down Guantanamo?
ANALYSIS

Nineteen years after he was captured in Afghanistan, and five years after a review board ruled he posed no threat to the United States, Abdul Latif Nasser was...