bridging divides, bipartisanship, US House, Problem Solvers Caucus
Save for Later
From The Left 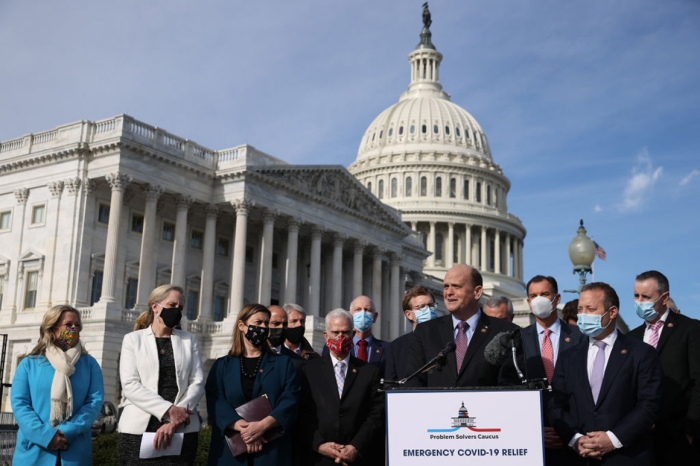 A few dozen House members helped bring bipartisan talks back from the dead on a massive spending bill passed six months ago. Now they want to do it again — in President Joe Biden's Washington.

The bipartisan 58-member coalition known as the Problem Solvers Caucus took something of a half-court buzzer shot this week by releasing its own version of an infrastructure deal, determined to keep talks alive between the president and Senate Republicans at least a bit longer before Democrats bound toward their own party-line bill.

By Thursday afternoon, the group of senators leading those bipartisan talks — and who have been privately sharing notes for months with the Problem Solvers — declared they had reached a deal similar to scope to their House counterparts. But the Senate group shared few details, and there are even fewer assurances that its cross-aisle framework could win enough support to keep talks going when Congress returns on Monday, with Democratic leaders under pressure from the left to move things along with the GOP.

That leaves a void for the Problem Solvers to fill as they try to help pry loose some kind of compromise, if you ask caucus leaders Reps. Josh Gottheimer (D-N.J.) and Brian Fitzpatrick (R-Pa.). Pollyannaish as it might seem, they insist that working from the ideological center can still pay off on infrastructure even if most of their colleagues in both parties think it’s a lost cause.

And the group, evenly split between both parties, has precedent for success — when the same band of centrists inserted itself into coronavirus aid talks last fall, its funding proposal ended up looking a lot like the final bill.

"People are eager to walk away. But why would you walk away when you still have an interest and both sides are at the same?" Gottheimer said in an interview.

But a new president, a new Senate majority leader and an insurrection later, the Hill dynamics couldn’t look more different than they did when the Problem Solvers helped salvage the Covid bill. A deal that took place under a divided Congress and a lame-duck president won’t be the same as any deal — if there is one at all — under a fragile Democratic majority.