China, Competition and Innovation Act, US Senate, Technology
Save for Later
Add to My Front Page
From The Left 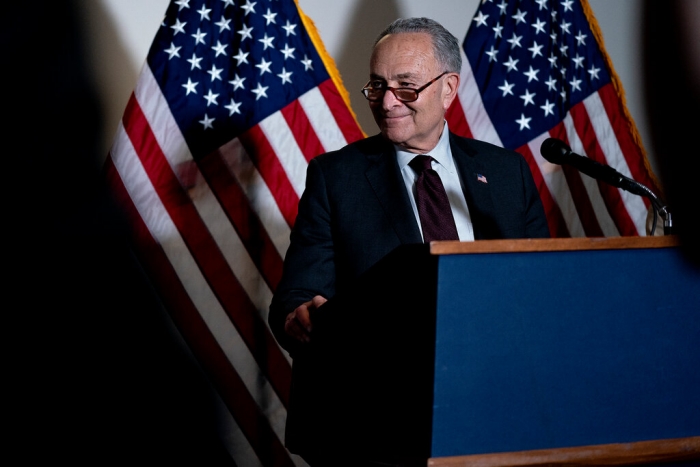 The Senate overwhelmingly passed legislation on Tuesday that would pour nearly a quarter-trillion dollars over the next five years into scientific research and development to bolster competitiveness against China.

Republicans and Democrats — overcoming their traditional partisan differences over economic policy — banded together to endorse what would be the most significant government intervention in industrial policy in decades. It includes federal investments in a slew of emerging technologies as well as the semiconductor industry.

Read full story
Some content from this outlet may be limited or behind a paywall.
China, Competition and Innovation Act, US Senate, Technology

Go ad-free! Support AllSides.
About these ads
More news about US Senate
https://www.nytimes.com/2021/06/08/us/politics/china-bill-passes.html

The Senate majority leader is courting moderates, channeling progressives and keeping a GOP channel open. It might not be enough. Shortly before Chuck...

The bipartisan infrastructure deal senators brokered with President Joe Biden is hanging precariously ahead of a crucial Wednesday test vote as...

A bipartisan trio of senators have unveiled legislation to bolster Congress' role in foreign policy, seeking to correct the balance of power between the...

Senate Majority Leader Chuck Schumer will force a vote next Wednesday on advancing the bipartisan infrastructure package, a hardball tactic aimed at moving...

Republicans are digging in on the federal debt limit, warning Democrats that it will be up to them to avoid a default as President Biden pushes for...

The Senate barreled toward a pair of Wednesday deadlines for advancing much of President Biden’s multitrillion-dollar economic agenda, with lawmakers bracing...

Florida man gets 8 months in prison in U.S. Capitol attack

A federal judge on Monday dealt an eight-month prison sentence to Paul Hodgkins for the Florida man’s role in the Jan. 6 U.S. Capitol attack, making him the...

Disagreements over expanding the Internal Revenue Service have snarled lawmakers’ efforts to firm up their roughly $1 trillion bipartisan infrastructure...

Former Republican U.S. Sen. Mike Enzi of Wyoming died Monday “surrounded by his family” at a hospital in Loveland, Colorado, following a...

Senate Majority Leader Charles E. Schumer is barreling toward a vote set for Wednesday on the $1.2 trillion bipartisan infrastructure package,...

Graham tells Biden ‘get on the phone’ to Schumer, postpone infrastructure test vote

Sen. Lindsey Graham (R-S.C.) says he would "do anything I could," including leaving town, to stop Democrats from passing a $3.5-trillion bill full of social...