National Security, DOJ, Russia probe, Donald Trump
Save for Later
From The Left 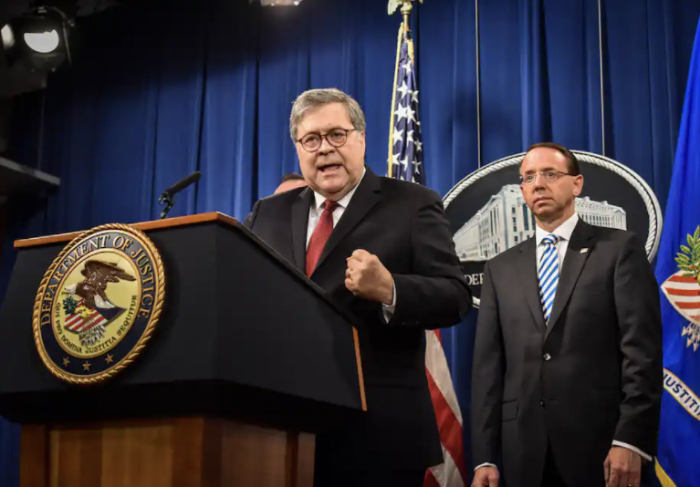 The Justice Department late Monday night released part of a key internal document used in 2019 to justify not charging President Donald Trump with obstruction, but also signaled it would fight a judge’s effort to make the entire document public.

The filing comes after a federal judge excoriated former U.S. attorney general William P. Barr — and the Justice Department more broadly — for their explanations of how and why it decided not to pursue a criminal case against Trump over possible obstruction of the investigation by special counsel Robert S. Mueller III.

The Justice Department filing is likely to both fuel and frustrate Trump’s biggest critics, particularly Democrats who have long argued that Barr stage-managed an exoneration of Trump after Mueller submitted a 448-page report into his findings about his investigation into whether the 2016 Trump campaign conspired with Russia to interfere in the election, and whether Trump tried to obstruct that investigation.

The central document at issue is a March 2019 memo written by two senior Justice Department officials arguing that aside from important constitutional reasons not to accuse the president of a crime, the evidence gathered by Mueller did not rise to the level of a prosecutable case, even if Trump were not president.

Earlier this month, U.S. District Judge Amy Berman Jackson issued a scathing opinion saying that she had read the memo and that it showed that Barr was disingenuous when he cited the document as key to his conclusion that Trump had not broken the law. On Tuesday, Jackson ordered the public release of the still-secret portions of her opinion discussing the Justice Department's Trump memo.

In that ruling, the judge also accused department lawyers of misleading her about the internal discussions that surrounded the memo and ordered the memo be released, though she gave the government several weeks to decide whether to appeal.

Read full story
Some content from this outlet may be limited or behind a paywall.
National Security, DOJ, Russia probe, Donald Trump