Free Speech, US Military, critical race theory, race and racism
Save for Later
Add to My Front Page
From The Right 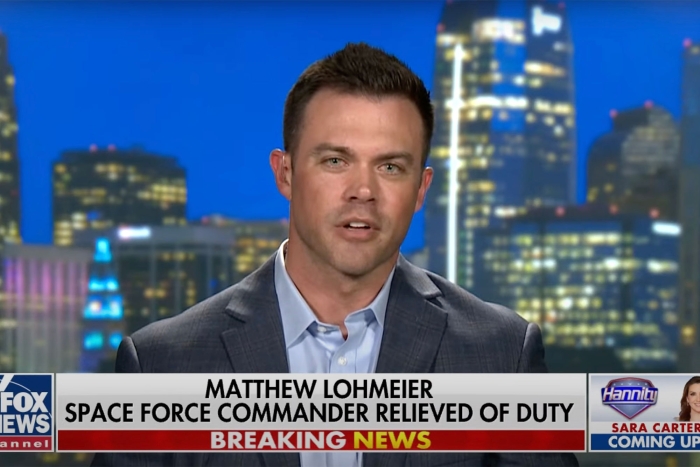 A recently relieved Space Force commander claimed Monday night that the Pentagon sent servicemembers a video that claimed that America and white people were “evil.”

Lt. Col. Matthew Lohmeier told Fox News’ “Hannity” that the videos “were sent out to every base [and] servicemember” and “we were asked to watch [them] in preparation for our extremism down days and discussions on race.”

Those videos, Lohmeier added, “taught that the country was evil, that it was founded in 1619 and not 1776, and that whites are inherently evil.”

PERSPECTIVES BLOG
When Donald Trump Thinks He Has Been Cancelled

President Biden leveled an extraordinary charge against Facebook and other social media platforms on Friday, claiming they are "killing people" by allowing...

The Biden administration is casting conservative opponents of its Covid-19 vaccine campaign as dangerous and extreme, adopting a more aggressive political...

Former president Donald Trump’s latest attempt at getting back on mainstream social media platforms came in the form of lawsuits on Wednesday against Twitter,...

News consumption is plummeting. That’s both good and bad news for democracy.
OPINION

A recent analysis by Axios found that traffic to online news sites has dramatically declined in the months since President Biden’s inauguration...

Hong Kong authorities arrested the authors of a children’s book this week and accused them of sedition. The book, “Defenders of Sheep Village,” explores the...

Donald Trump’s social media posts in the aftermath of the 2020 election and the Jan. 6 attack on the Capitol got him suspended from Facebook and Twitter amid...

Arecent article published by Politico about COVID-19 vaccine hesitancy also discussed a new plan by White House allies that has left some people...

We Disagree on a Lot of Things. Except the Danger of Anti-Critical Race Theory Laws.
OPINION

What is the purpose of a liberal education? This is the question at the heart of a bitter debate that has been roiling the nation for months. Schools,...

Who Gets To Decide the Truth?
OPINION

Until the 1600s, the average annual rate of economic growth in human history was approximately zero, on a per capita basis. Economies developed haltingly and,...

What Type of Speech Will Biden Ask Facebook to Suppress Next?
OPINION

"They're killing people." That was the simple declarative sentence President Joe Biden uttered in response to a question a reporter asked him as he left the...

Democrats’ Definition Of ‘Misinformation’ Is Whatever Hurts Them Politically Today
OPINION

Facebook is killing people, misinformation is rampant, and the only people who can save us from ourselves are the all-wise executives at 1600 Pennsylvania...

Democrats’ Definition Of ‘Misinformation’ Is Whatever Hurts Them Politically Today
ANALYSIS

Facebook is killing people, misinformation is rampant, and the only people who can save us from ourselves are the all-wise executives at 1600 Pennsylvania...

Just days after calling voter identification requirements “the most significant test of our democracy since the Civil War,” President Joe Biden ...