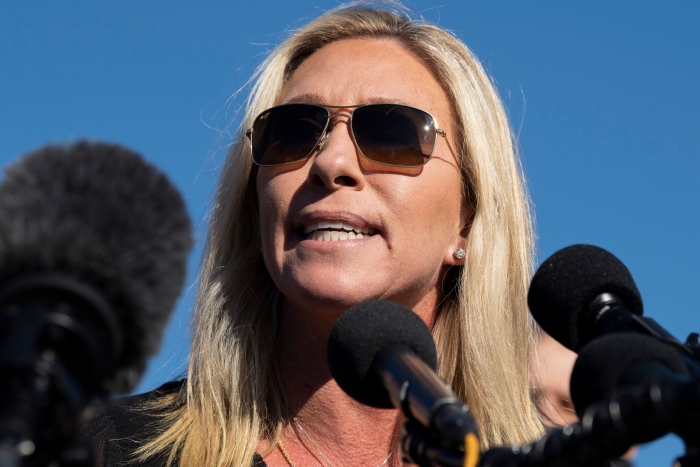 Rep. Marjorie Taylor Greene (R-Ga.), the freshman congresswoman who was stripped of her committee assignments earlier this year, was spotted Wednesday chasing after Rep. Alexandria Ocasio-Cortez (D-N.Y.) accusing her of supporting “terrorists.”

The incident prompted Ocasio-Cortez’s office to call on House leadership to do what it can to ensure members’ safety.

Two Washington Post reporters witnessed the incident, which occurred when Ocasio-Cortez left the House chamber and did not stop to talk after Greene twice called her name.

Greene then “picked up her pace” and began “shouting” at Ocasio-Cortez,...

NEWS
A right-wing writer who crowdfunded $100,000 to repair the Puerto Rico home of AOC's grandmother says she declined to accept the money
Insider

More than 100 scholars have issued a dire warning that Republicans are putting the nation’s democracy in danger by restricting access to voting and...

What Chuck Schumer can learn from Harry Reid
OPINION

By the time he decided to “go nuclear” on filibusters for most presidential appointees, Harry Reid had had it with Republicans. The obstruction that...

You could fill a small library with books on right-wing populism. Some authors argue that these movements emerged in reaction to relatively recent events...

Excuse Me If I’m Not Ready to Unmask
OPINION

In Rob Reiner’s 1987 cult comedy, The Princess Bride, Fezzik asks the mysterious man in black a question as they scuffle atop the Cliffs of Insanity...

Jewish Democrats clash with Ilhan Omar after comments on U.S. and Israel

A group of Jewish Democrats in the House is publicly feuding with Rep. Ilhan Omar (D-Minn.) after she tweeted about "unthinkable atrocities committed...

A right-wing writer who crowdfunded $100,000 to repair the Puerto Rico home of AOC's...

A right-wing writer crowdfunded over $100,000 after launching a campaign for Rep. Alexandria Ocasio-Cortez's grandmother. Matt Walsh, a writer with...

Prescription for pandemic end: Masks off, vaccines on
OPINION

Should you still wear a mask in close quarters in a store, a restaurant or a gym if you haven’t been vaccinated? Yes, you should. What if you have been fully...

Editors Note: AllSides is hosting and powering this event in partnered with a coalition of bridging organizations and media companies. It will be our third...

Buddy, pal, chum — what is the state of friendship among the political parties? One particular political persuasion appears to be more tolerant than others...